At least 217 people are dead after a 7.1 magnitude earthquake rocked central Mexico Tuesday afternoon, hitting on the 32nd anniversary of the biggest earthquake to ever strike the country’s capital.

More than half of the fatalities are in Mexico City, the country’s civil defense agency said.

The earthquake caused extensive damage to Mexico City, leveling at least 44 buildings, including homes, schools and office buildings, according to President Enrique Pena Nieto, who did a flyover of the city Tuesday afternoon.

Among the dead are at least 22 people, including students and at least two adults, from a collapsed primary school in the south of the city. Pena Nieto visited the school late Tuesday. He said those 22 bodies have been recovered, but that 30 children and eight adults are still missing.
Rescuers were clawing at the wreckage looking for survivors late Tuesday, pausing to listen for voices. The Associated Press reported relatives said they had received Whatsapp messages from two girls inside.

The more than 200 deaths occurred in Mexico City, and the states of Morelos, Puebla and Mexico, said Carlos Valdes, director of Mexico’s National Center for Prevention of Disasters.

Luis Felipe Puente, the head of Mexico’s National Civil Defense Agency, announced at about 4:30 a.m. they were actually revising the earlier death toll of 248 to 217.

Preliminary numbers show about 3.8 million customers are without power, Mexico’s Federal Electricity Commission said.
Meanwhile, the city’s airport descended into chaos as the ground rippled and chunks of plaster fell from the walls, Dallas resident George Smallwood told ABC News. “I felt the ground shaking, and I heard everyone screaming and starting to run,” he said, adding that at first, he thought he was in the middle of a terror attack. 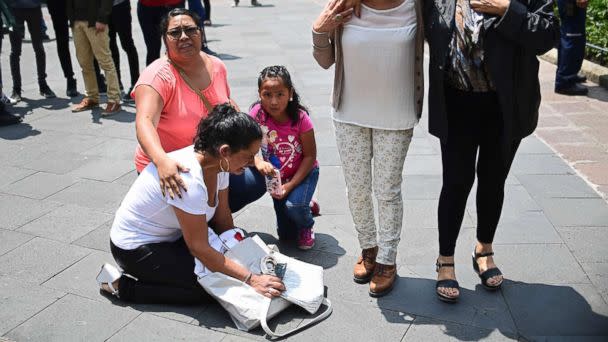 Smallwood had stopped in Mexico City for a long layover after a vacation in Medellin, Colombia, and had spent the day exploring the capital. He was getting ready to go through security at Mexico City International Airport for his 3:35 p.m. flight back to Dallas when the earthquake hit.
Parts of the ceiling were “swinging back and forth,” he said, and the panicked crowd took off “running in every different direction.”
The tremors lasted for about six to seven minutes, he estimated. Once the shaking subsided, first responders swooped in to help the injured and a fleet of military and police helicopters buzzed overhead, he said.
Smallwood’s flight was rescheduled for 8:30 a.m. Wednesday, so he will need to find somewhere to stay for the night, he said.
Tuesday’s earthquake — which hit at about 2:14 p.m. ET near the town of Raboso in Puebla state, according to the United States Geological Survey — comes 11 days after an 8.1 magnitude quake struck off Mexico’s southern Pacific coast, killing dozens of people.

Thousands of people on the capital’s main boulevard streamed out of buildings and into the street in panic after the quake struck. 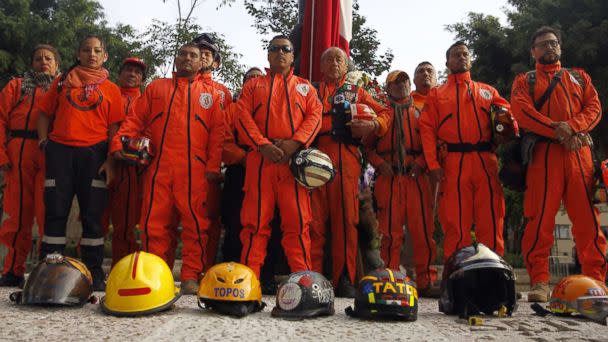 “I was just paying at the supermarket and suddenly the floor went ‘boom boom,’” Mexico City resident Lara Rodriguez told ABC News on Tuesday. “People were obviously panicking.”
Rodriguez added, “So I rushed out and I went to get my kid from school to make sure he was okay. Luckily everything was fine, but on the way there was a lot of debris. There were clouds of sort of dust flowing up as if a bomb had hit or something.”

Mexico City — built on a former lake bed — is one of the worst possible places for an earthquake to strike due to its soil, which can amplify shaking by factors of 100 or more, California-based seismologist Dr. Lucy Jones told ABC Los Angeles station KABC. By comparison, the worst conditions seen in Los Angeles during an earthquake is shaking amplified by a factor of five, Jones said.

Earlier in the day, earthquake drills were held in Mexico City to mark the anniversary of the Michoacán earthquake of 1985, which caused widespread death and injuries as well as catastrophic damage in Mexico City.

At the Instituto Morelos secondary school, which partly collapsed, school director Adelina Anzures told The Associated Press that the school conducted an earthquake drill in the morning, just two hours before the came in handy just two hours later when the real quake struck.

“I told them that it was not a game, that we should be prepared,” Anzures said of the drill. When the quake came, she said the children and teachers rapidly filed out.

“It fell and everything inside was damaged,” she said, adding that nobody was hurt.

Narciso Suarez, of Mexico City, said he was attending a meeting on the ninth floor of a high-rise building when he first felt the quake’s tremble. He said authorities in the building ordered those in side to shelter in place “at least until the shaking passed.”

Suarez, who was also in the area on Sept. 7 when the last earthquake struck, said Tuesday’s tremble was “a lot worse.”
With the last earthquake, “we immediately evacuated the building and we saw no damage,” he said. “But today … there are a lot of buildings that have collapsed in this neighborhood. It’s really sad.”
President Donald Trump tweeted Tuesday afternoon, “God bless the people of Mexico City. We are with you and will be there for you.”
World Reacts

God bless the people of Mexico City. We are with you and will be there for you.

The U.S. State Department said in a statement, “We stand ready to provide assistance should our neighbors request our help. Our embassy in Mexico City has sent out public messages to U.S. citizens in Mexico, and the embassy stands ready to provide consular assistance to any U.S. citizens who may have been affected. We offer our condolences to any who were injured or lost loved ones.”

A spokesman for U.N. Secretary-General Antonio Guterres said, “The Secretary-General is saddened by the loss of life and damage resulting from the earthquake that took place in Mexico today. He extends his condolences to the Government and people of Mexico and wishes those injured a speedy recovery.”

In light of the earthquake, as well as the aftermath of hurricanes Harvey and Irma, nominations for the Latin Grammy Awards, scheduled for Wednesday, have been postponed. No new date has been chosen yet. The awards ceremony takes place in November in Las Vegas.
Latin Recording Academy President Gabriel Abaroa Jr. said in a statement Tuesday that the delay comes “as an outgrowth of the terrible and tragic recent natural disasters affecting Mexico, Puerto Rico, Dominican Republic, Houston, and Florida, the homes of many Hispanic communities.”