Contention has trailed the arraignment of a lady, Bolanle Aseyan, by the State Criminal Investigation and Intelligence Department, Yaba, for false rape accusation.

The convener of the #EndSARS movement, Segun Awosanya, who posted a screenshot of the charge sheet on the social media, claimed that Aseyan was remanded in police custody pending the perfection of her bail conditions.

The defendant, however, posted videos of herself on Twitter, denying the claim.

Responding to a tweet from her follower, who asked if indeed she was arrested, she wrote, ‘Arrestation’.

She further posted a video of her being in a vehicle held in traffic.

“Uncle, it’s not handler, don’t stress my life, please,” she said in response to another follower, who asked for proof that she was the one.

According to court documents posted by Awosanya, 24-year-old Aseyan was arraigned on Wednesday before the Yaba Magistrates’ Court on five counts bordering on false accusation and extortion.

The charges read in part: “That you, Bolanle Aseyan, and others currently at large between June 29, 2020, and July 1, 2020, at No. 12a Molade Okoya Thomas Street, Adeniyi Jones, in the Lagos Magisterial District, did conspire with others now at large to cause injury to the person, reputation and profession of Dr Olufunmilayo Ogunsanya by your false publication on the social media tagging him as a rapist, thereby committing an offence punishable under Section 413 of the Criminal Law of Lagos State, 2015.”

According to Awosanya, the court ordered that Aseyan be remanded in the custody of the SCIID pending the perfection of her bail conditions.

Aseyan started a controversy on Twitter after she raised allegations of rape against Ogunsanya, aka Dr Olufunmilayo, after the latter supported her travel to the United Kingdom.

She also reported to the U.K police and the medical authorities, seeking the withdrawal of the Ogunsanya’s licence based on the allegations.

However, both agencies of government reportedly cleared the doctor, who also filed a complaint of false accusation against her.

Aseyan was said to have sneaked back to Nigeria, where she allegedly continued the defamation against Ogunsanya.

The #EndSARS convener said the matter was reported to the police in Lagos, as Aseyan later showed up with her lawyers at the Bar Beach Police Station.

The matter was then transferred to the SCIID, where the suspect reportedly made allegations against the investigating police officer and sought the transfer of the matter to the Zone 2 Command, claiming assassination attempts.

According to Awosanya, the request was rejected and she was arraigned.

He tweeted, “She has been remanded in the custody of Panti until bail conditions are met. She will undergo COVID-19 test before being taken to prison if she fails to meet her bail conditions.

“This, however, is just the State vs Bola Aseyan in a criminal investigation and I believe a civil suit may follow concurrently given that she is a flight risk and criminal minded.

“It should be noted that there are several suits running concurrently in this matter, including the U.K suit served her via mail as approved by the courts since she absconded from the U.K. She received the mail and deliberately refused to respond.

“I probably won’t be surprised if she makes bail in a few weeks after incarceration before the next hearing date on October 14 and gets rearrested because the police department she falsely accused of an assassination attempt, as well as others, maybe filing separate suits against her.”

The activist, who posted a photo of the suspect in court, said she might attempt to circumvent the system.

But Aseyan debunked the claims as she complained about the bad Lagos traffic and followed it up with video evidence.

“She was taken to court and granted bail, and she was released after the bail terms were met. So, it is not true that she was not arrested,” he stated. 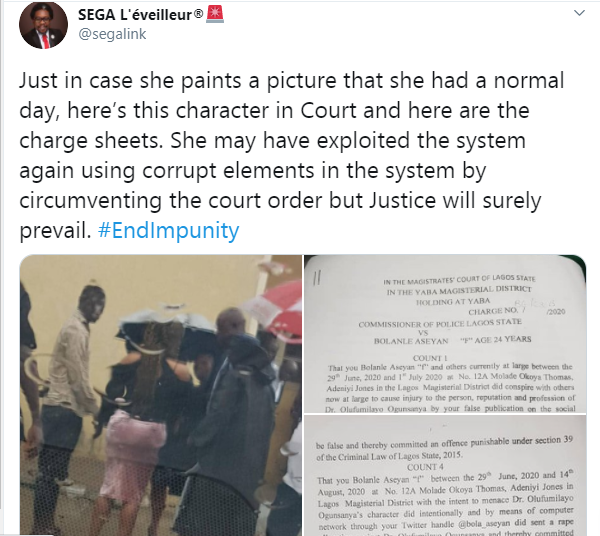 I want to ride from Lagos to Israel – Nigerian Bike Adventurer