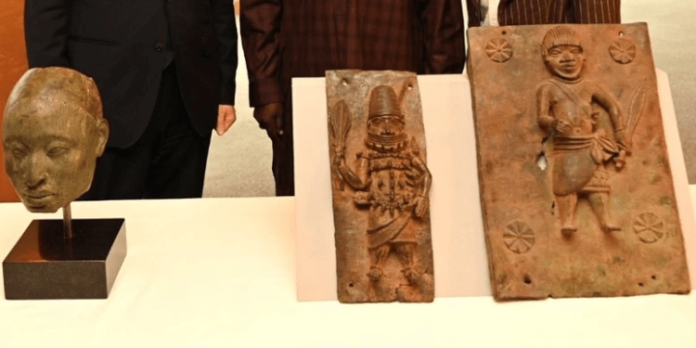 The Metropolitan Museum of Art (MET) in the United States has handed over three looted Benin and Ife artefacts domiciled in the country to Nigeria.

The artefacts were received by Abba Tijjani, Director-General of National Commission for Museums and Monuments (NCMM), during a handover ceremony in the US state of New York on Monday, which was also attended by Lot Egopija, Consul-General of Nigeria in New York.

The Benin artefacts were obtained by the MET from a New York collector in 1991, and the Ife head was retrieved from a private seller who reached an agreement with authorities to return it after he first tried to sell to the museum without obtaining legal title.

Speaking on the development, MET director, Max Hollein, insisted the action was the right thing to do as part of measures to respect cultural identities.

He said: “The Met is pleased to have initiated the return of these works and is committed to transparency and the responsible collecting of cultural property.

“We have we had long-lasting relationships, the museum is committed to a responsible process in collaborating in areas of standards as well as to study works that have been in our collection.

“It’s an ongoing effort to learn to exchange and to find the right solutions.”

Also speaking, Tijjani, the DG of NCMM, who signed a Memorandum of Understanding (MoU) with MET, commended the museum for returning the artefacts to Nigeria.

He called on other museums in possession of Nigerian artefacts to follow MET’s exemplary gesture.

“So, we are looking forward to collaborating with MET now that we are friends and we understand each other and we want to see how we can work together.

“We have about 52 museums across the country under the commission, and we have 65 monuments and sites and staff working in the museums will require modern training.’’