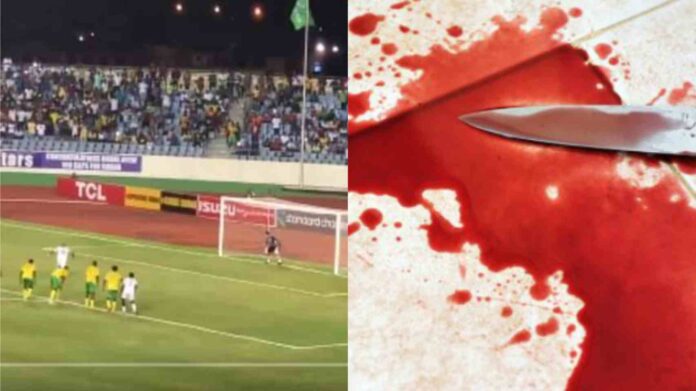 A Ghanaian barber living in South Africa has reportedly been stabbed to death following an argument over the legitimacy of Ghana’s penalty against Bafana Bafana in Qatar 2022 World cup qualifying match.

The deceased, identified as one Yaw Owusu, was said to have engaged some locals in an argument after Ghana’s win over South Africa on Sunday.

The Black Stars booked their place in the World Cup play-offs, having beaten Hugo Broos’ side 1-0 thanks to a penalty from Andre Ayew, however, the decision to award the penalty sparked controversy, with some South Africans accusing the referee of cheating them.

Reports gathered Yaw Owusu, who works at a saloon in Durban, was stabbed when the argument over the penalty’s legitimacy became heated.

“Yaw Owusu, a 39-year-old man who works at a saloon had a few arguments with his apprentice before the game on Sunday, the argument resurfaced on Monday morning after the controversies on the penalty and he stabbed him to death,” a former King Faisal radio representative Obeng Boadu, who currently resides in South Africa narrated to Kumasi-based Fox FM.

“We are now trying to find his family members in Ghana. The tension on Ghanaians here is very high. The South Africans have threatened to deal with Ghanaians here after their petition to FIFA.

“We are pleading with authorities to come to our aid here since things may be scarier soon. I don’t think Ghanaians are too safe as I speak to you.”

On Monday, the South African FA announced that it had filed a complaint at FIFA and CAF to review the match.

Meanwhile, Ghana defender Daniel Armartey insists the penalty that led to the Black Stars’ win over South Africa was the correct decision.

The Leicester City centre-back said he was pulled by Bafana Bafana’s Rushine De Reuck while attempting to connect to the ball.