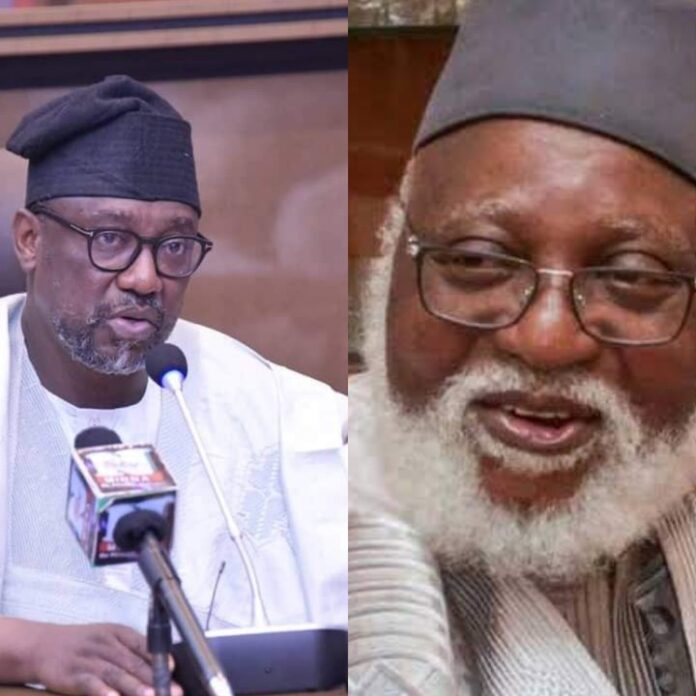 The Niger State Governor and Chairman North Central Governors Forum, Abubakar Sani Bello have described Nigeria’s former Head of State, Gen. Abdulsalami Abubakar (rtd.) as a nobleman committed to promoting the ideals of peace not only in Nigeria but in the Africa Sub-region.

According to the Chief Press Secretary to the Governor, Mary Noel-Berje, Sani Bello stated this during a Festschrift Conference organised by the Abdulsalami Abubakar Institute for Peace and Sustainable Development Studies (AAIPDS) with the theme “Gen. Abdulsalami A. Abubakar: A Mediator & Bridge Builder”, held in Abuja on Thursday.

The conference which had participants from across the globe, was in honour of former Nigeria’s leader, in recognition of his contributions and efforts to ensure peace across Africa through the peace Institute he founded.

The Governor commended the role of Gen. Abubakar for entrenching democracy in Nigeria in 1999 and for his continuous efforts in conflict resolutions in Africa Sub-region.

“Gen. Abdulsalami A. Abubakar has demonstrated this sterling quality as an ambassador of peace through the numerous mediation engagements he has been doing within Nigeria and Africa at large. I, therefore, congratulate him as he is being so lavishly celebrated in his lifetime”, he said.

He appreciated the General, National Peace Committee for dousing tension among political office contenders at national and state levels for ensuring peace before, during and after the 2015 and 2019 general elections in Nigeria.

Governor Sani Bello called on the participants to take advantage of the conference so as come up with various solutions to bring an end to the security issues that are ravaging the African Continent.

“I would like to wish all participants of the Festschrift Conference fruitful deliberations. May the outcome of the proceedings continue to deepen our resolve to find “African solutions to Africa’s problems”, he said.

Speaking to journalists, Gen. Abubakar appreciated the encomium poured on him saying that he was working in collaboration with other world leaders to ensure that conflicts in Africa are resolved to allow peace and tranquillity to reign.

“Africa is belated with self-inflicted conflicts and if care is not taken, the whole continent will be in turmoil, so there is a need for quick intervention and I thank God he has given me the opportunity to do as much as I can, he said.

Former Chief Justice of Niger State and wife of the General, Justice Fati Lami Abubakar gave a synopsis of the life of her husband from his Military career to date and all his sacrifices to have a United and peaceful continent.