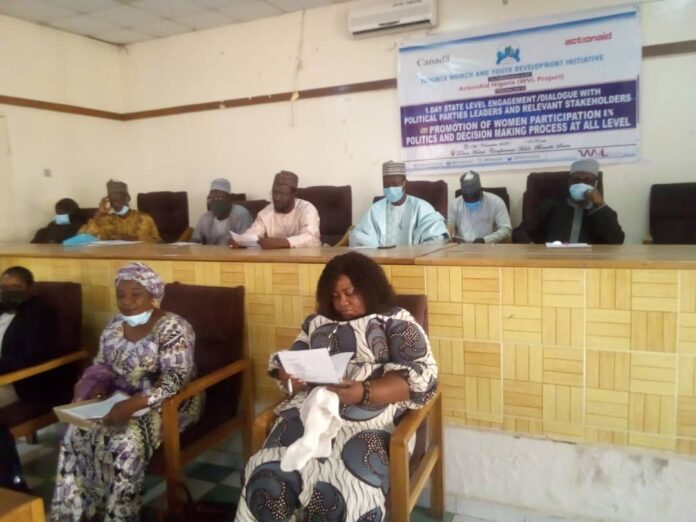 A Non-Governmental Organisation (NGO) based in Bauchi, Fahimta Women and Youth Development Initiative under its new project, Women Voice for Leadership yesterday hosted political parties leaders and other relevant stakeholders on a one-day state-level engagement/dialogue on the promotion of women participation in politics and decision making process at all levels of government.

Speaking at the occasion, Florence Daniel, in charge of Women Voice for Leadership in the organisation, said the dialogue is to seek stakeholders inputs on the best ways of improving and advancing women participation in governance.

“This meeting was organised to engage political leaders and relevant stakeholders as we are approaching 2023 general elections because we discovered that, women participation in decision making is not good as we expect.”

“We invited our participants, women from Bauchi, Giade and Alkaleri Local Government Areas of Bauchi State to discuss with them on crucial issues that will ensure their full involvement in politics.”

Mrs Florence said women must be part of the decision-making process at all levels to enable them express their views and for them to contribute positively to nation-building.

In a paper titled “Monitoring Participation of Women In Politics and Governance in Nigeria, Mr Adamu Sarkin Yara of the Bauchi State Directorate of National Orientation Agency stressed the need for creating an enabling environment that will allow women to engage meaningfully in the decision-making process.

He urged stakeholders to advocate for the protection of women from abuse, empower them economically and politically and review the necessary legislations to accommodate the growing interest of women in politics both elective and appointive positions.

On their part, the representatives of political parties at the meeting pledged their continued support to women so as to enable them to contribute positively to the decision-making process.

Participants at the programme while identifying their major challenges, called for a concerted effort towards addressing them.