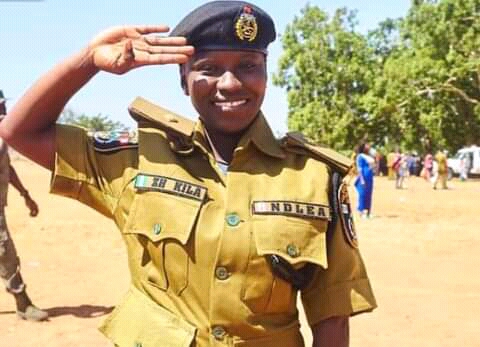 Zainab Habibu, a Jigawa lady framed by a drug cartel while travelling for lesser Hajj in Saudi Arabia in 2018 has been commissioned as an Assistant Superintendent of Narcotics (ASN) of the National Drug Law Enforcement Agency (NDLEA).

Zainab Habibu travelled to Saudi in 2018 with her mother to perform the lesser Hajj, but mistakenly at the Airport, some syndicates from Nigeria who are in the act of DPO’s activities, changed her bag and put drugs into her luggage, later, she was arrested and detained for 2years, it was mother luck that saved her from being killed.

Later, a thorough investigation was carried out, and it was discovered that there are some Nigerians that go to Saudi pretending to be on Lesser Hajj and in the process, they will put drugs which is then transported to the holy land into other people’s bag especially women.

This was what happened with Zainab Habibu whose father is presently the General Manager of GM Radio Dutse, members of the press and other Ulamas intensify prayers. 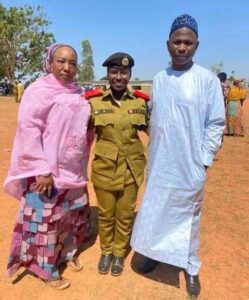 It was later discovered that the luggage in question does not belong to Zainab Habibu, and then after some time, both she and her mother were allowed to come back to Nigeria after Nigerians in Saudi Arabia also stood up for her including our Ambassador.

When she returned to Nigeria, she was then a Student of Maitama Sule University, Kano State Governor Abdullahi Umar Ganduje organized a welcome for her and her mother including Habibu who is her father, and later, gave her the sum of N6m cash to finish her studies.

Since then, she has gone underground to do her studies with a pledge that one day she must be an NDLEA Officer, this she did, she graduated, she went to NDLEA School, and has also passed out as an officer.

So, it is now a triple celebration for her, she graduated, she also pass out from NDLEA and has now realized her ambition to serve her country as a Uniform Officer, what might probably be left in her mind is to get married.