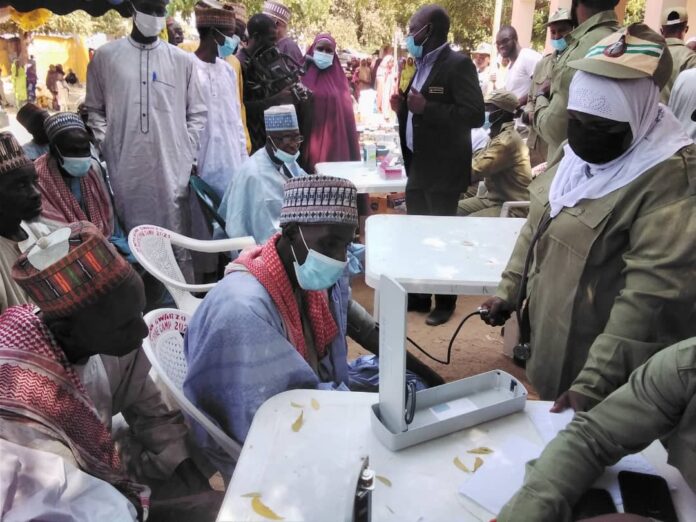 The programme according to the state NYSC coordinator Hafsat Yerima, who flagged it off was the second phase noting that the first phase was launched by the Director-General of NYSC Shuaibu Ibrahim, at Dazigau village of Nangere local government of the state in June this year.

According to her, the programme which renders medical services including diagnosis, treatment and referrals of various ailments have reached about 2, 000 people in the village. 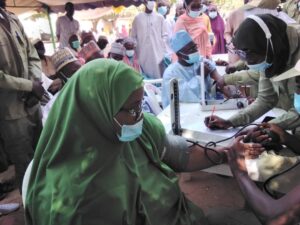 Hafsat explained that in the second phase of the health outreach, a total of 50 corps medical personnel comprising doctors, pharmacists, nurses, laboratory scientists and physiotherapists would be intervening yet again in the areas of diagnoses, treatment and referrals in line with the focus of the programme.

“And we shall be doing so with the support of some of our stakeholders who are either assisting us with their personnel or providing material support in the area of drugs and medical equipment.

“This is in furtherance of the desire of the NYSC to bring health care as close as possible to all citizens of Nigeria who are in the rural areas”. She stated.

In his address, the state governor Mai Mala Buni represented by the commissioner of youth, sports and social development Goni Bukar Lawan expressed appreciation to the management of the National Youth Service Corps (NYSC) for the initiative of mobilizing corps medical personnel for the provision of health interventions saying it enhances the general well being of the rural dwellers.

“Indeed, this intervention of the scheme in the area of health care services to our people is intended to support the efforts of this government in its avowed commitment to the enhancement and expansion of health care facilities and service delivery across the length and breadth of the state.

“As you are all aware this government places a high premium on excellent health care delivery to the people. That is why we implement a deliberate policy of allocating 16% of the state budget to the health sector in line with our commitment to improving health care delivery in the state”. The governor stated.