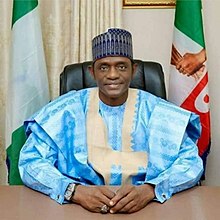 The APC Rebirth Group, otherwise known as Concerned APC Stakeholders, said it is not a party to the purported dissemination of Governor Mai Mala Buni-led Caretaker/Extra-Ordinary Convention Planning Committee (CECPC), the group disassociated itself from the plan, saying it will never support “recklessness.”

Earlier, a section of youth group had claimed to have dissolved the ruling party leadership under governor Buni.

In a statement signed by one of the leaders of the APC Rebirth Group, Aliyu Audu on Monday in Abuja said any disregard for constituted authority by some persons is not the right way to go.

Audu said “The attention of the APC Rebirth Group, otherwise known as Concerned APC Stakeholders, has been drawn to a communique by a youth group of the party purportedly dissolving the Mai Mala Buni-led Caretaker/Extra-Ordinary Convention Planning Committee (CECPC). We wish to dissociate ourselves from this intemperate action and to state that we do not support it in any way.

“While we share in some of the sentiments expressed by the youth group, especially those bothering on inclusion and the slow process leading to the much-anticipated convention of the party; we however believe that a blatant disregard for any constituted authority is not the way to go.

“It’s the considered opinion of the APC Rebirth Group that all party members must show respect and regard for offices and those who occupy them. While we believe that all groups and individuals within the party have the absolute right to express their grievances and even push for the needed reforms, just like we have done severally, we nonetheless believe that such actions must be in accordance with the rules and regulations of the party. We would not encourage any group or individuals to arrogate themselves powers they do not have.

“While we reiterate our position on inclusion and the need to build a party that works for everyone, we call on all who feel strongly about the APC to exercise decorum, respect the rules of the party and not seek to engage in anti-social behaviours that violate the sanctity of the APC. The party has rules and procedures for changing leadership, and all party members, no matter how strongly we feel, must explore the legitimate and stipulated party rules and not act outside of them.