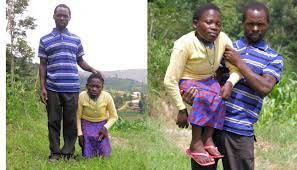 A woman who has been bullied by people including her biological father who said she would not get any man to marry her due to her short stature has ironically found a man who is madly in love with her.

Uwiriyingiyimana Odeth, 26, was born short and has suffered bullying at the hands of other children who called her dwarf.

To worsen her plight, her father was one of the bullies and always told her she wouldn’t get any man to marry her due to her height.

She was born in 1995 but his father refused to send her to school because he had no hope in her. He would lock her up in the room every day.

It took the intervention of the local authorities to make him stop molesting the lady but still resents her.

Fortunately, some good Samaritans enrolled her in a vocational school where she learnt weaving. She was given a weaving machine which she used to work to make money.

She could make beautiful dresses with the machine out of which she made money to cater for herself, the mother and other siblings since her father has abandoned them.

She is now appealing for help to procure a new machine as the one she was using to work has broken down beyond repair.

Also, interestingly, despite her height, a man identified as Dushirimana Celestin has fallen in love with her and intends to marry her.

According to him, the bullying by others including her own father was what made him fall in love with Odeth.

Although he is equally facing bullying from other people in the community for his decision, he has resolved to make the lady his wife and settle down with her.

Afrimax TV has highlighted the plight of Odeth and her love story with Celestin in a video report.