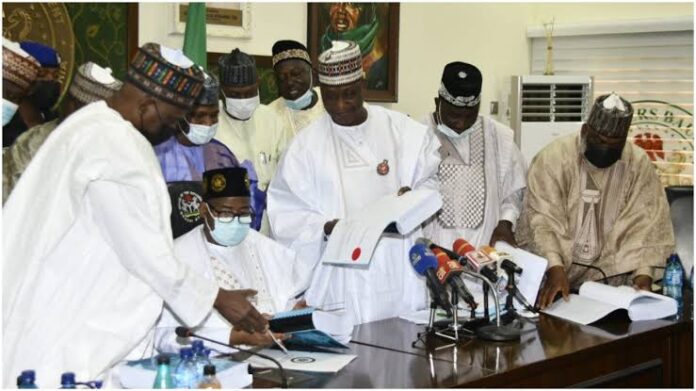 Signing the Budget yesterday at Bauchi Government House Governor Bala said the government accepts the increment in the budget by the lawmakers, to capture the financial autonomy of both the legislature and the judiciary.

He said, “The occasion concludes the chain of processes within the budget circle culminating into the state’s 2022 appropriation law which approved the 2022 budget in the sum of N197,475,607,143.85, for which my assent is sought.”

“I want to, with a deep sense of humility and respect, thank the Members of the Assembly for their patriotism in ensuring the speedy passage of the budget. I must thank the House for the support we have continuously received in our efforts to improve the lives of our people.

“The budget has been derived from the state medium-term plan 2021/2025 which will be rolled out very soon. The plan which aligns with the overall national and subnational perspectives has set out our developmental objectives and defined our key priorities which we hope to achieve through the budget process.

“The adjustment of N2.1 billion made by the House to the proposals submitted was done to support the move for the financial autonomy of the Legislature and the Judiciary and other counterparts that were omitted in the estimates,” he said.

The governor said the budget aligns with his administration’s commitment towards ensuring the independence of those arms of government noting that the increase was done in good faith and we accept it as such.

The Speaker, Bauchi State House of Assembly, Abubakar Suleiman, told the governor, that the increase in the proposal submitted by the governor was because some items were omitted.

He said: “We are presenting to you a budget of N197,475,607,143.85. You may notice an increase of about N2.1 billion. This was so because there was an oversight. There is supposed to be a counterpart fund for one of the Non-Governmental Organizations but it wasn’t captured in the budget by the Ministry.

“We observed that and included it and there were other minor increments. This was done in good faith and for the development of the state.”