Home Disaster How fire razed down Next Cash and Carry Supermarket, billions of naira... 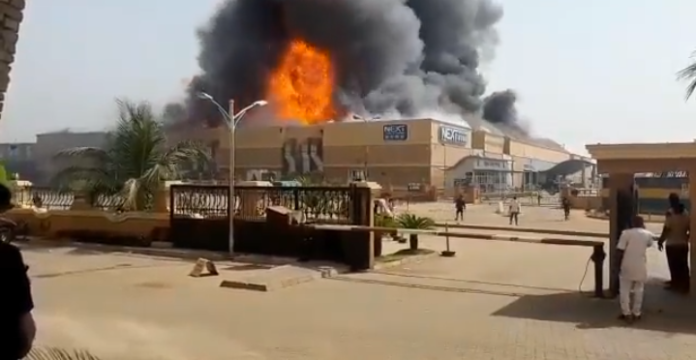 Next Cash and Carry, one of Abuja’s biggest shopping malls has been gutted by fire.

The mall which is situated in the Jahi Area of the Federal Capital Territory went up in flames around 11:00 am Sunday.

Mayam Tardy, an employee at NEXT in a phone chat with Neptune Prime confirmed that the fire started when the supermarket was about to open for sales.

She added that the fire is suspected to have emanated from a Christmas tree located at the information desk.

A witness at the scene, Mrs Sandra Emeka, said she was at the gate of the supermarket trying to gain entrance to the compound when she noticed dark smoke coming out of the store.

“I don’t know where the fire started from or what caused it but I just noticed the smoke and heard people around telling us to move back that there was fire,” she said.

Another customer, Mr Philip Paul, expressed sadness over the incident as he described the supermarket as a “big shopping centre.”

“It is so unfortunate this happened at this time when the store must have been stocked up for the festive season.

“This is a great loss and I sympathise with the management of this supermarket,” he said.

In one of the videos seen, residents were seen looting from the compound of the popular shopping mall.

Neptune Prime can confirm that goods worth billions of naira have been engulfed in flames and hundreds of direct and indirect workers rendered jobless.