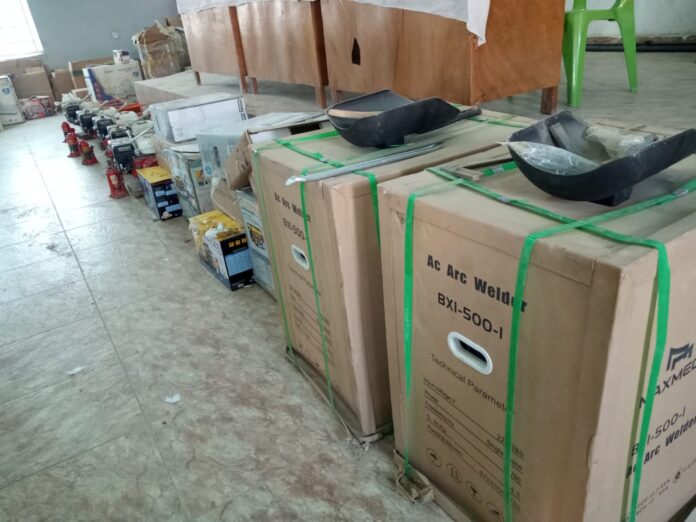 The National Directorate of Employment (NDE) in Bauchi state, has distributed starter packs to 20 graduated trainees in the state.

The state Coordinator of NDE, Malam Lawan Yaya, said that the beneficiaries were selected from the just concluded training under its Basic National Open Apprenticeship Scheme (B-NOAS).

Speaking during the distribution ceremony in Bauchi on Friday, said that the beneficiaries were selected across the 20 LGAs of the state, highlighted some of the skills they were taught to include tailoring, welding, GSM repair, among others.

Represented by Alhaji Inuwa Abdullahi, Head of Department, Agriculture, NDE, Bauchi, he said “Today, we are giving out resettlement items to 20 of our selected beneficiaries who have met all our criteria.

He added that the selected beneficiaries of the items exhibited high levels of concentration, punctuality and obedience during the course of their training, hence, the distribution of the items as a way of motivating them.

The state Coordinator, however, explained that the starter packs distributed are loan packages and the beneficiaries were expected to start repayment after six months.

Beneficiaries were also drawn from its Advanced National Open Apprenticeship Scheme (A-NOAS) as well as its Quick Fix scheme.

Earlier, Alhaji Isa Abdul, Director, Vocational Skills Development Department, NDE, Headquarters, urged them to make effective use of the items for the purpose they were meant for so as to become employers of labour.

Speaking on behalf of the beneficiaries, Jamal Abubakar appreciated the Director-General of NDE, Malam Abubakar Fikpo for the provision of the resettlement packages, adding that they would judiciously make use of the equipment so as to become successful entrepreneurs.