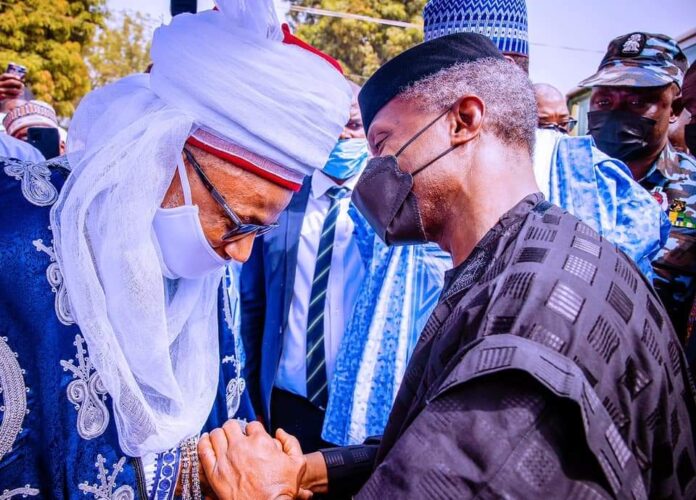 The Federal Government has stressed the importance of Nupeland and the strategic position of Niger State to the national development of the country.

Vice President, Prof. Yemi Osinbajo disclosed this at the Wadata Palace, Bida, during the turbaning ceremony of four illustrious sons of Bida Emirate.

In a statement signed by the Chief Press Secretary to the Governor of Niger State Mary Noel-Berje, said Prof. Osinbajo who was the special guest of honour at the event attended by a mammoth crowd, acknowledges the fact that Niger State is key in engendering rapid growth and development in the country, which has propelled the Federal Executive Council (FEC) to approve the reconstruction of many federal roads in the state out of the 9 roads selected in North Central region.

READ ALSO: NUC to clamp down on 67 illegal universities in Nigeria

He said the Nupe Kingdom has a critical role to play particularly in the agricultural sector noting that between July to September 2021, agriculture alone contributed up to 30 per cent of the country’s GDP.

“Nupe land with its vast farmlands and extensive farming activities is key to delivering this figure.

“This administration also understands the importance of ensuring that all Nigerians have a sustainable standard of living and we must ensure that all are gainfully employed in legitimate economic activities”, he said.

While congratulating the newly turbaned title holders, the Vice President urged them to see the honour bestowed on them as a fresh call to service to humanity.

He commended the Etsu Nupe and Chairman of Niger State Council of Traditional Rulers HRH, Alhaji Yahaya Abubakar for sustaining the rich cultural heritage of Nupeland and uniting them, describing him as a quintessential leader and a rallying point to all Nupe people.

Governor Abubakar Sani Bello who was the Chief Host at the event commended the Estu Nupe for all his efforts at ensuring cordial relationship among all the traditional rulers in the state pointing out that it has translated to peaceful coexistence amongst the seven Emirates in the state.

The Governor also appreciated the Traditional Ruler for the conferment and turbaning of some of the illustrious sons of his Emirate, stressing that they were worth the honour.

He congratulated the newly turbaned titleholders and urged them to justify the honour done to them and contribute their quota in sustaining the existing peace and unity in the Emirate.

Earlier, Etsu Nupe, Alh Yahaya Abubakar appreciated President Buhari for approving roads reconstruction in the state, saying that the roads when completed, will end the untold hardship road users are going through.

He maintained that those turbaned were carefully selected based on their immense contributions to the development of the Nupe Kingdom.

The Emir acknowledged those that contributed to the success of the event and those that attended.

Chairman of the occasion, Rt. Hon Femi Gbajabiamila, represented by Hon Abubakar Hassan Nalaraba, said that honour done to their colleague was for the entire members of the House of Representatives, hence, they are not taking it for granted.

Hon. Saidu Musa Abdullahi on behalf of others that were turbaned thanked the Emir for finding them worthy of the titles bestowed on them and pledged their commitments and willingness to give their best to the overall benefits of the Emirate.

Others turbaned were, Hon Mohammed Alhaji Haruna, a member representing Bida South as Dan Turaki Nupe and the executive chairman of Bida, Hon Suleiman Sheshi was turbaned as the Maina Nupe.

Highlights of the event was the conferment of “Garkuwan Yamman Nupe” meaning “Defender of Nupe Kingdom” on the Vice President by the Estu Nupe, presentation of a horse to the vice president and cultural performance by the Etsu Nupe Royal Band among others.