“Only God knows who is benefitting from oil subsidy” – Atiku

Former Vice President Atiku Abubakar has explained that only God knows who the beneficiaries of fuel subsidies in Nigeria are.

Atiku stated this when he filled questions from newsmen at the end of a meeting with the Northeast Business Community in Gombe State.

According to him, there is a mistake somewhere over the issue of fuel subsidy by the Federal Government because the subsidy paid doesn’t help the common man.

He said “let me give a brief history in Nigeria. When we were in government, we intended to remove the subsidy, but in four phases. I chaired the committee that started the action, we did the first and the second removal of fuel subsidy, but we didn’t do the third and the fourth before our tenure ended. 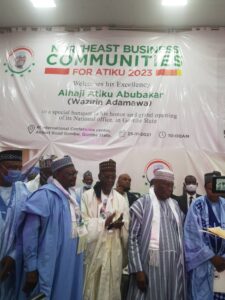 “We thought when he came, he will come up with a good idea on how to address the problems of paying subsidy but he didn’t, that’s what brought us to where we are today”.

Atiku further said “In fact, I don’t tell lies when it comes to politics or government official work, this subsidy, only God knows who are benefitting from it, but it didn’t benefit a common man. I think what we should do is to sit down with all stakeholders and look at the issue to know how we will genuinely help a common man and all Nigerians and remove the subsidy.”

Atiku sought unity, more support and prayers for the nation to thrive, saying “I hope we will continue to work together until we rescue our country from the sad and ugly situation we are in.”