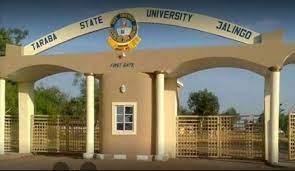 The students revealed that the strike was affecting their ongoing examination as the water supply had been cut off in their hostels.

A 400-level student in the Department of chemistry complained bitterly, “We don’t have water in the hostels and light is not also stable as a result of the strike.

“Some students who paid their school fees late are having issues obtaining receipts which they must present before writing examination.”

The non-academic staff of the Taraba University, comprising Senior Staff Association of Nigeria Universities and the Non-academic Staff Union of Nigerian Universities under the umbrella of Joint Action Committee had on Monday barricaded the Senate building of the university in protest to the nonpayment of their October and November salaries among other issues.

Non-academic staff who vowed not to vacate the building until their salaries were paid, prevented the entrance and exit of vehicles and staff working in the Senate Building.