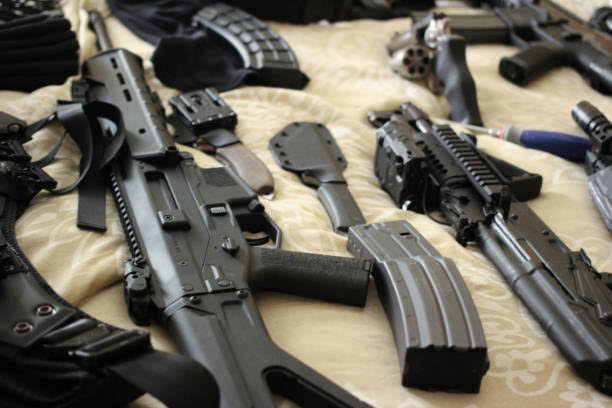 According to a report by the Auditor General of the Federation, about 178,459 different types of arms and ammunition got missing from the Police armory without being reported in 2019.

It also says the police high command failed to keep a comprehensive record of unserviceable and expired firearms and ammunitions.

This, it says, could lead to conversion of firearms for illegal use.

The disclosures are contained in pages 383 to 391 of the “Auditor General for the Federation annual report on non-compliance/internal control weaknesses issues in Ministries, Departments and Agencies of the federal government of Nigeria for the year ended 31st December 2019”.

Referenced AuGF/AR.2019/02 and addressed to the Clerk to the National Assembly, the September 15, 2021 report was signed by the Auditor General of the Federation, Adolphus Aghughu.

The Auditor General’s letter conveying the report to the National Assembly, as required by law, reads in part: “In accordance with section 85(2) and (4) of the constitution of the Federal Republic of Nigeria, 1999 (as amended), I have the pleasure to submit to the National Assembly, two copies of the Auditor General for the Federation’s annual report on the non-compliance/internal weaknesses issues in Ministries, Departments and Agencies of the Federal Government of Nigeria for the year ended 31st December, 2019”.

The action of the Police Force, the report says, violates paragraph 2603 of the Financial Regulations.

It says: “In the event of any loss of stores, the officer in charge of the store in which the loss occur shall report immediately to the head of department or unit but not later than three days, by the fastest means possible if the loss occurs away from headquarters.”

It added: “Audit observed from the review of Arms Movement Register, Monthly Returns of Arms and Ammunition and Ammunition Register at the Armoury section that a total number of lost firearms as reported as at December 2018 stood at 178,459 pieces.

“Out of this number, 88,078 were AK-47 rifles, 3,907 assorted rifles and pistols across different police formations which could not be accounted for as at January 2020.

“Formal report on the loss of firearms through dully completed Treasury Form 146 (loss of stores) were not presented for examination.

“The value of the lost firearms could not be ascertained because no document relating to their cost of acquisition was presented for examination.

“The above anomalies could be attributed to weaknesses in the internal control system at the Nigeria Police Force Armament.”

The report says there was the risk of mishandling of firearms/firearms getting to the wrong hands, conversion of firearms to illegal use and loss of government funds.

It adds: “Several numbers of firearms from the review of Arm Issue Register, monthly returns of arms and ammunitions obtained from Force Armament, Force headquarters for various States Commands, Formations, Zonal offices, Training Institutions, squadrons and physical inspection of firearms and ammunition at the Force Headquarters have become unserviceable and dysfunctional.

“Records of the total number of unserviceable firearms were not produced for examinations, and there were no returns from Adamawa State Command, Police Mobile Force (PMF) 46, 56,64 and 68 for the period under review.

“Similarly, returns were not submitted by some Police Training Institutions and some Formations, and Physical verification of firearms and ammunition at the Force Armament, Force Headquarters showed large quantity of damaged and obsolete firearms which needed to be destroyed.

“The damaged and obsolete firearms and ammunition should be treated in line with Financial Regulations 2618 which requires the destruction to be carried out in such a manner as to render the firearms unusable for their original purpose.”

The Auditor General also queried the Police Force for engaging in financial irregularities of awarding and paying for contracts above its approval threshold and paying for them without evidence of project execution amounting to N3,271,439,688:30.

It said 10 contracts amounting to N1,136,715,200.00 were awarded to a single proprietor in the name of different companies with the companies’ profiles, contact phone numbers and email addresses of the three companies were the same.

It said further that “the three companies did not disclose their relationship in accordance with the fundamental principles of procurement as required by extant regulations”.

While attributing the anomalies to weaknesses in the internal control system at the Nigeria Police Force Armament, the AuGF said it was possible that the contract was awarded to an “incompetent contractor”, while payment was made for contract not executed.

It asked the Inspector General of Police to give reasons why contracts were awarded to companies owned by same persons, account for the money and remit same to true treasury.

The report also indicted the Police Force for paying the sum of N924.985 million for 11 contracts involving construction of three units of Gunshot Spotter System, supply of 50 units of Ballistic Roller Trolley and 20 units of Ballistic Mobile Surveillance House in some selected Commands and Formations without evidence of project execution.

It said further that items claimed to have been constructed/supplied at the Force Headquarters, Federal Capital Territory (FCT) Command, Explosive Ordinance Disposal (EOD) unit and Police Mobile Force (PMF) unit as specified in the award letters revealed that the contracts were not executed as at the time of physical verification of the purported items in June, 2020.

The AuGF also demanded in the report that the Inspector General of Police should be asked to give reasons why payments were made for contracts not executed, recover and remit the said amount to the treasury.

The Force, the Auditor General’s report says, further made three payments totaling N38,731,491.30 to two contractors in 2018 to cover 2017 liabilities on procurement of Ballistic Helmet Grade III A, and Riot Gun 38mm without evidence to confirm that the expenditures were provided for in year 2018 approved Estimates.

Another expenditure of N7.092 million was made in seven payment were made from sub-head 0406(L)-Maintenance of Ammunitions and Riot Control Equipment and Subhead 0406 (M) – Maintenance of Armory and Ranges for purposes that are not related without evidence of virement.

It also said that in violation of paragraph 708 of the Financial Regulations which states that “On no account should payment be made for services not yet performed or for goods not yet supplied”, the police paid N613.480 million in six contracts awarded to two contractors on 17 January 2019 for procurement of Ballistic Roller Trolley, construction of Gunshot spotter and Ballistic Mobile Surveillance House.

It said: “There was no evidence of execution, as relevant documents such as invoice, SRV, SIV, Ledger entry, etc. were neither presented to the team nor the items found in the location indicated in the vouchers, while 100% advance payment was made to the two contractors before execution of the contracts”.

It also said that there was a contract for the Supply of 20 units of Ballistic Mobile Surveillance in Borno State at a contract sum of 249,980,000.00, which was beyond the approval threshold of both the Force and its supervising ministry.

It reports that “both contractors obtained Performance Bonds from Sovereign Trust Insurance Plc and the validity of the Bond terminated on 28 June 2019. By implication relieving the Insurance Company of any liability in event of legal action arising from non-performance on the part of the Contractors.

“This practice contradicted the contract agreement (Article III) terms of payment signed and sealed between Nigeria Police Force and the contractors.

“Specifically, Article III Paragraph 3.1C required payment to be made to contractors after satisfactory production of certificate of inspection and acceptance duly signed by the Buyer’s representative.

“The two contractors did not participate in the pre-qualification process, while tax clearance certificates were not presented for examination”.

It also indicted the Force for usurping the powers of the Federal Executive Council in awarding two contract worth about N500.335 million which is above the approval threshold of the Nigeria Police Force Purchasing and Tenders Board.

The Report says the management of the Police Force failed to provide a response to the eight queries issued to them, while saying that the Inspector General of police be asked to provide answers to the Public Account Committees of both the Senate and the House of Representatives or be sanctioned for gross misconduct.