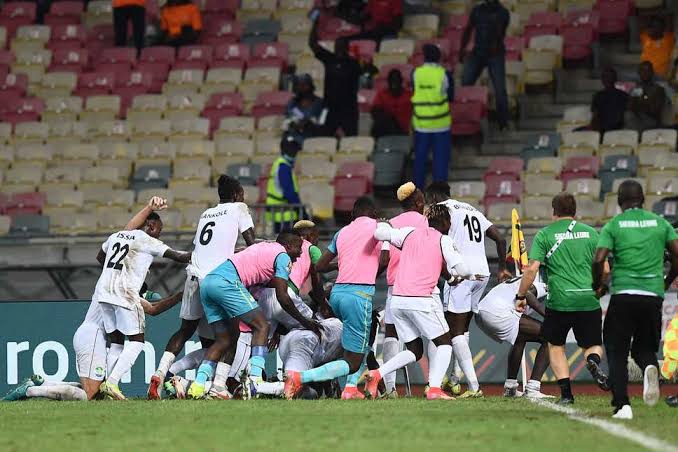 Cote d’Ivoire was denied a chance to qualify for the knockout round of the Africa Cup of Nations, following a dramatic 2-2 draw with Sierra Leone on Sunday.

Alhaji Kamara was the hero for the Sierra Leoneans after his stoppage-time leveller to earn the Leone Stars another point in Group E.

Sebastian Haller gave the Elephants a 1-0 lead in the first half before Musa Kamara equalised in the second with a stunning left-footed effort.

Sierra Leone move up to second after two draws in their opening two matches.

At the start of the match Sierra Leone, who was looking for their first win in six matches, found themselves under pressure as the Ivorians, led by Wilfred Zaha, searched for an early goal.

Ivory Coast came close to getting the opening goal in the second minute, but Wilfried Zaha, after tricking his way past two markers, went down after a slight challenge by the third defender, thus wasting an early chance for the home side.

There was another opportunity for the former Afcon champions when they won a free-kick just at the edge of the box, but Jean Michael Seri was not clinical enough with his delivery as he hit the wall when he had an option to loop it over as he had waiting teammates in the box.

After the two early chances failed to produce a goal, the Elephants were awarded a ninth-minute penalty when Zaha was brought down by Umaru Bangu. However, Franck Kessie failed to beat Mohamed Kamara as the Sierra Leonean goalkeeper dived to his left to stop the spot-kick.

Ivory Coast kept attacking despite wasting three clear early chances, and in the 11th minute, Pepe failed to deliver a powerful shot when he was set through by Sebastien Haller. Kamara easily collected the timid shot by the Arsenal man who was unmarked inside the penalty box.

The Ivorians finally took the lead in the 25th minute when Haller rather easily found the back of the net as Sierra Leone defenders accorded him some space to unleash a shot. The Ajax striker collected Zaha’s pinpoint pass before he fired the ball past goalkeeper Kamara, who headed in the opposite direction in the process.

Mohamed Turay wasted a rare chance to put Sierra Leone at par in the 37th minute. Ivory Coast’s Badra Sangare read Turay’s move well and dived in the right direction to stop the low drive in the one-on-one situation.

Osman Kakay received the first yellow card of the game in the 51st minute when he roughly blocked Zaha just outside the 18-yard area. Pepe took the resultant free-kick but sent it wide.

Almost out of nowhere, Kamara equalised for Sierra Leone with a magical left-footed effort that Sangare – in the Ivory Coast goal – had little chance of stopping in the 55th minute.

After a few clever moves in front of the Sierra Leone box, Ivory Coast managed to regain the lead when Pepe beat Kamara with a low, curved drive in the 66th minute.

Christian Kouame – who had just come on for Haller in the 72nd minute – failed to extend the lead further for his side as he could not connect to Aurier’s delivery from the right-hand side as Leone Stars backpedalled under pressure in the 81st minute.

There was drama in the additional minutes when Sangare let the ball slip out of his hands after clumsily collecting Jean Kouassi’s header. Sierra Leone’s Kei Kamara collected the loose ball, passed it to his namesake, who slotted it into an empty net to equalise.