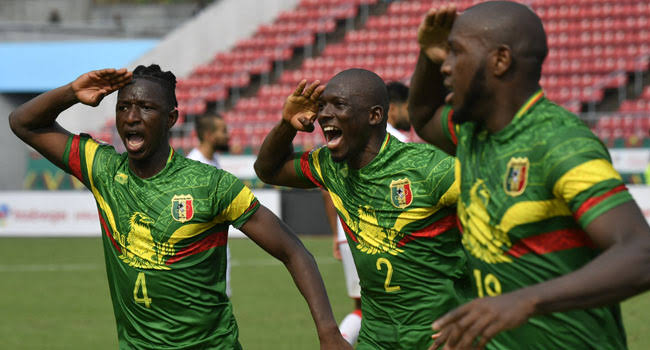 The Africa Cup of Nations match between Mali and Tunisia on Wednesday ended in confusion amid bizarre scenes as the Tunisian team complained that the referee had blown the final whistle too soon.

Zambian official Janny Sikazwe signalled the end of the match and a 1-0 win for 10-man Mali in the coastal town of Limbe with the clock showing 89 minutes and 47 seconds.

The Tunisians furiously protested that there were several minutes of stoppage time still to play.

With confusion reigning, Mali coach Mohamed Magassouba was giving his post-match victory press conference when an official entered the room under the stand to indicate that the game would restart.

A Confederation of African Football official told reporters that the match needed to be played to a conclusion, with three minutes remaining, but the Tunisian team did not re-emerge and the referee brought the game to a definitive end when Mali kicked off again.

Coach of Tunisia, Mondher Kebaier, lamented that “The referee blew the whistle at the 89-minute mark, it’s lunar. He deprived us of concentration.

“We did not want to resume because the players had already taken their baths, deconcentrated and demoralized in the face of this gruesome situation.”

The Eagles of Mali kicked off their TotalEnergies Africa Cup of Nations Cameroon 2021 campaign with a narrow 1-0 victory over Tunisia in Limbé.

Ibrahima Kone scored from the spot two minutes into the second half after Ellyes Joris Skhiri was adjudged to have handled the ball inside the area.

Tunisia had a penalty of their own 15 minutes from time, but captain Wahbi Khazri saw his effort saved by Bosso Ibrahim.

The Eagles were reduced to 10 men in the closing stages following El Bilal Toure’s heavy challenge on Skhiri.

The West Africans dominated proceeding in Limbé with their free-flowing football forcing the Carthage Eagles of Tunisia to sit deep.

Ibrahim Kone showed flashes of his ability inside two minutes, dropping a shoulder before forcing a corner from Ben Said in the Tunisian goal.

Mali started the second period the better side and were awarded a penalty when Skhiri handled the ball inside the box.

Towering striker Ibrahima Kone neatly dispatched the penalty to give Mohamed Magassouba’s side the lead.

Tunisia won a penalty late on but Wahbi Khazri failed to beat Bosso Ibrahim, who dived to his right to deny the Tunisian captain.

The end of the match was marred by the controversial decision of the match referee to put the game off seconds before the end of regulation time. The Malians returned to the pitch to play the remaining time, but the Tunisians preferred not to return to immediately look into the next match.

Mali’s victory sends them to the top of the group before their second match against The Gambia on 16 January. The Scorpions will play Mauritania in the second match of Group F.