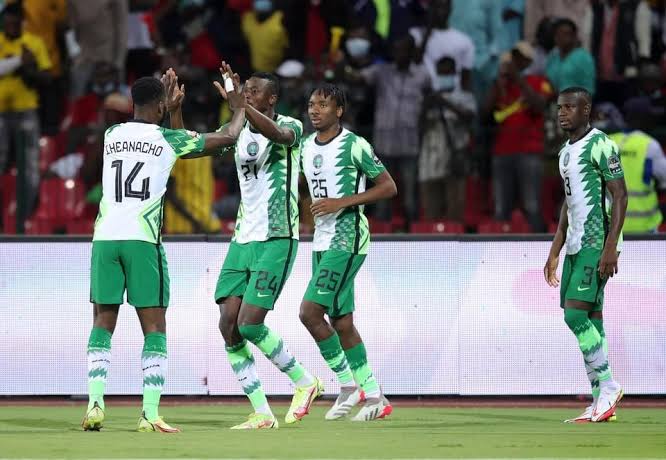 The Super Eagles continued their winning run at the 2021 Africa Cup of Nations (AFCON) on Wednesday with a 2-0 victory over Guinea-Bissau.

It was a record-equalling fixture for Austin Eguavoen who was also in charge the last time the Super Eagles won all its group games in 2006.

After a goalless first half, goals from Umar Sadiq and William Troost-Ekong helped the three-time African champions grab nine points after three games in Group D.

Guinea-Bissau made an inspiring start to the encounter with Mame Balde using his first touch to beat Ajayi but an onrushing Uzoho kept the ball out of danger with his save.

In the 15th minute, Nigeria had their first chance at goal with Nwakali’s cross from a set-piece situation but Ajayi’s header was wide off target.

It did not take long for the Super Eagles to split the Djurtus’ defence with Iwobi’s lobbed pass to Sadiq in the 20th minute but the striker’s initial touch ended the attack.

Another chance came through Nwakali to Sadiq in the 20th minute but the Almeria striker, in a one-on-one situation, tried to dribble goalkeeper Maurice Gomis and he was eventually dispossessed by Opa Sangante.

Nigeria’s first shot on target came on the half-hour mark when Iheanacho found a little bit of space following Nwakali’s corner-kick but his strike went directly to Gomis’ hands.

The Super Eagles started the second 45 minutes as the better side and they were rewarded with the opening goal through Sadiq in the 56th minute after a fine left-footed pass from Iheanacho.

Immediately after he scored his maiden goal for Nigeria, the 24-year-old made way for Peter Olayinka to make his international debut while Simon replaced Ejuke.

Simon boosted Nigeria’s attack and quest for a second goal with his runs and dribbles which paid off in the 75th minute.

Following his individual brilliance into the Guinea-Bissau defence, the Nantes winger fired a stunning shot that hit the crossbar and fell in the path of Troost-Ekong to put into an empty net.

It took a lengthy VAR check to verify if the captain was not in an offside position and the goal was eventually passed by Kenyan referee Kamaku Waweru.

A few minutes later, Baciro Cande’s side had their opportunity to pull a goal back through Fali Cande’s free-kick just outside of the Super Eagles’ penalty area but it was deflected by Iheanacho for a corner-kick.

Umar and Ekong’s goals mean that all six goals scored by the Super Eagles have come from six different players.

With the victory, Nigeria remain the only team that reached the last 16 round winning all group matches at the 33rd AFCON.

Egypt also qualified from the group with a 1-0 win over Sudan.

Nigeria will remain at Garoua for their round of 16 tie as group winners.