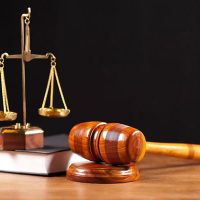 After four years, the Bauchi State High Court, number five, has sentenced three persons to 17 years in correctional service each for robbing their victim of the sum of N60,000.

The suit, which had lingered in court for over four years, had the court finding Muazu Ya’u, Adamu Abdullahi and Awwalu Babayo guilty of the offence and sentenced them for the robbery committed sometime in 2018.

The trio were charged before the court in September 2018 for armed robbery as contained in the charge sheet, which was an act committed contrary to section 96 and punishable under 97 of the Penal Code of Bauchi State; Vol 1 of 2006.

The prosecuting counsel, Mohammed M. Adamu Esq told the court that the convicts, together with one Ruwa Abdullahi, now at large, “attacked one Abdullahi Ahmadu with machetes and sticks, until he became unconscious, and robbed him of the sum of N60,000 and thereby committed an act punishable under section 1 (1) a and b of the Robbery and Fire Arms (special provisions Act Cap R11, LFN 2004, as applicable to Bauchi State.”

In his judgement, Justice Muazu Abubakar sentenced them to two years imprisonment for the first charge count each while they are to serve 15 years imprisonment each for the second count charge –all without an option of fine, the sentences are to run concurrently.

While reacting to the judgement, defence counsel, Yakubu Maikasuwa, expressed his dissatisfaction with the judgement against his clients hinting that an appeal would be filed and hoped that the young men may be favoured.

Maikasuwa said, “We are not happy that criminal acts are on the increase but there should be fair hearing of such cases.”