The Bauchi State Government says it has taken the necessary measures and steps to enable it to benefit maximally from oil discovery in the Alkaleri local government area of the state.

Governor Bala Mohammed of the state made this known on Monday while addressing journalists on his 2-day engagement with stakeholders of Alkaleri local government as part of his ongoing community engagement.

The Governor unveiled plans by his administration to establish a skills acquisition centre in order to provide the needed manpower for oil exploration in the Alkaleri oil site of the state.

He expressed optimism that Bauchi would be the future of Nigeria because of the discovery of oil, gas and other mineral resources in Alkaleri and other parts of the state.

“The issue of discovery of oil in Alkaleri is a good development not only to Alkaleri, northern Nigeria but Nigeria as a whole, and definitely this discovery is an opportunity for everybody. 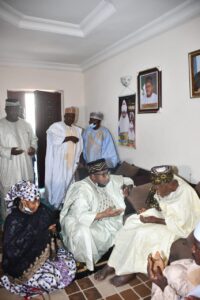 “And as a Government, we are planning to establish a skill acquisition centre to ensure effective engagement of our youths in oil activities to reduce unemployment.”

He, therefore, urged stakeholders notably traditional rulers in the Alkaleri oil site to eschew personal interest for proper utilization of the opportunity by not supporting people with questionable character to engage in criminal activities in the area.

On his 2-day engagement with key stakeholders in Alkaleri local government, Governor Bala said the community engagement is to afford him the opportunity to brief them on the successes recorded by his administration.

“I am in my local government as part of community engagement we are doing to foster security and of course communal relationship, interrelationship, and love to those who identified with us.

“This is a new system of government we are doing, we will not abandon those who voted for us and we have a lot of burden of gratitude to God and to the people of Alkaleri, Bauchi and Nigeria in general. This 2-day engagement certainly is more than a year engagement”, the Governor said.

On her part, the wife of the governor, Aisha Bala Mohammed assured women in the area that her husband would not relent in coming up with empowerment programmes geared towards improving their living conditions.

In a related development, Governor Bala warned citizens of the state against voting into power non-indigenes of the state, especially those coming from neighbouring countries to claim indigenship of the state.

The Governor gave the warning while addressing PDP wards leaders in the Alkaleri local government area of the state during an interactive session.

He said citizens of the state must desist from electing non-indigens into elective positions especially the office of the governor to avoid underperformance.

He said, electing indigenes into elective positions would enable them to be interacting with their constituents to solve their major challenges so as to meet their yearning and aspirations.

“I want to warn the people of Bauchi State against electing non-indigenes, especially those coming from Cameroun as they don’t have anything to offer for your development, if they can come for business, we will welcome them but not for politics because politics is for people who know the values of their people.”

Governor Bala who appreciated the PDP Ward leaders in the local government area, for their support to his administration, enjoined them to sustain the tempo for the success of the PDP led government in the state.

He said despite the numerous achievements recorded by his administration in the delivery of dividends of democracy, assured to do more for the overall development of the state.

The PDP Chairman in Alkaleri local government, Alhaji Babayo reaffirmed their support and cooperation to the Governor to enable him to achieve the desired objectives.