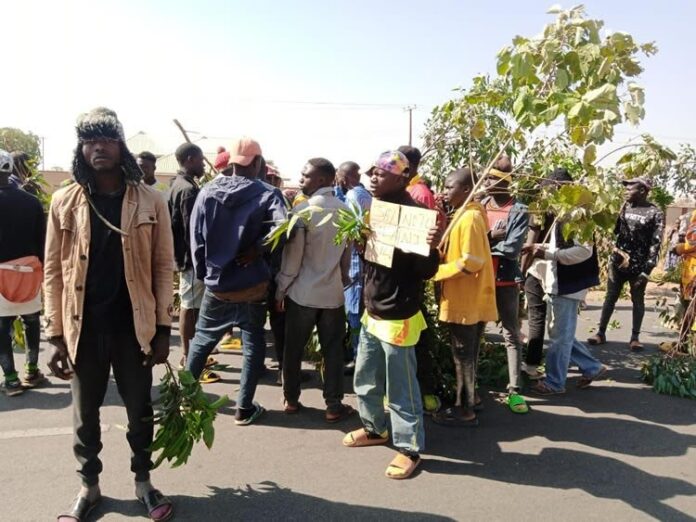 Residents, mostly youths, of Dong Community in Jos North Local Government Area (LGA), of Plateau State on Sunday took to the streets in protest of an attack on a mining site in the area which left four (4) workers dead.

The angry residents brandishing green leaves and branches of trees cut from the nearby bush blocked the major roads passing through the community while calling for justice.

A resident of the community, John Emmanuel, who confirmed the development to The PUNCH in Jos on Sunday, gave reasons for the protests.

Emmanuel said, “Yesterday, (Saturday), some gunmen suspected to be herdsmen stormed Dong community in Jos South LGA. They went to a mining site where some people were working in the community and attacked them, killing four persons and injuring two others.

Neptune Prime gathered that the incident which happened on Saturday evening, also saw a female worker suffering gunshot injuries and is currently receiving treatment at a hospital.

According to a community leader, Emmanuel Dong, the gunmen stormed the mining site and opened fire on the workers, killing four of them on the spot while others managed to escape with injuries.

“The mining workers were going about their business when the gunmen whom we suspect to be Fulani herdsmen, suddenly appeared and started shooting at them. It happened on Saturday around 6pm.

The attack was unprovoked as the miners were taken unawares. Four of then were killed on the spot while others who managed to escape sustained gunshot wounds.

According to Dong, the incident which happened on Saturday evening, also saw a female worker suffering gunshot injuries and is currently receiving treatment at a hospital.

“One of the female workers was rushed to a hospital in Jos and is currently undergoing treatment,” Dong said.

The Plateau Police spokesman, ASP Gabriel Ubah, who confirmed the attack, said the police had commenced investigations into the incident with a view to apprehending the culprits.

“We are aware of the attack and four people were killed.

“The Command has deployed armed police men to the area and calm has returned.

“We have commenced investigations into the incident and we can assure that the suspects will be apprehended,” Ubah said.