The Executive Governor of Yobe state and Chairman APC Caretaker Extraordinary Convention Planning Committee, Hon. Mai Mala Buni, has called on Youth in Gashua for calm following the alleged shooting of a truck driver by security operatives in Garin Alkali.

According to a statement signed by the DG, Press and Media Affairs in the state,
Mamman Mohammed, Governor Buni had already directed for immediate investigation into the matter for necessary action.

The governor described the incident as unfortunate as progress in sustainable peace was being recorded across the state.

He said, “The government and the security authorities will not tolerate any act of recklessness capable of disrupting our hard-earned peace.

“I, therefore, assure you that government will properly investigate the matter and deal with it decisively.

“I also appeal to our good people of Bade local government area and the entire state to remain calm and law-abiding.

“We should avoid anything detrimental to our peace. You are advised to be good Muslims, take it as the will of Allah and avoid bonfire on the roads.

“May Allah (SWT) forgive the deceased of his shortcomings, grant him Aljannatur Firdaus, as well as his family, the fortitude to bear the loss.” 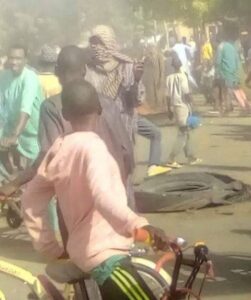 Neptune Prime reports that irate youths In Gashu’a town, the headquarters of Bade local government area of Yobe State, took to the street on Saturday to protest the killing of a driver allegedly shot dead by a security operative in Garin Alkali.

It was gathered that the driver, Muhammad Musa Tooli, was allegedly shot dead by a soldier while refuelling his vehicle at Garin Alkali, a border village between Bade and Bursari local government areas of the State.

The protesting youths were seen burning tyres on the street of the town demanding justice over the killing of the driver.

An eyewitness, Abubakar Mohammed, said, “The late driver was killed by a soldier while trying to refuel his Zanghol (Desert Truck) at a filling station at Garin Alkali late Friday evening.

“Though the soldiers have banned buying fuel in Jerry cans, we’re yet to know why he was shot because he was refuelling his vehicle.

“Government needs to come in quickly because the situation is going out of hand now.”