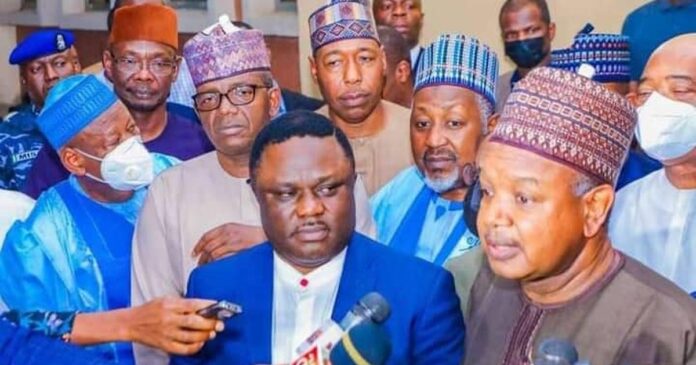 Governors elected under the umbrella of the All Progressives Congress have insisted that February 2022 remains a realistic month for the party’s National Convention.

Chairman of the Progressive Governors’ Forum and Governor of Kebbi State, Abubakar Bagudu, stated this yesterday at the conclusion of a three-hour meeting at the Kebbi State Governor’s Lodge in Abuja.

The meeting was well attended with all governors of the Forum barring Aminu Masari of Katsina and Muhammad Yahaya of Gombe present.

Addressing newsmen after the meeting, Bagudu said, “The Progressive Governors met to discuss numerous issues affecting the forum and member states and we acknowledged some of the achievements in the states and members of the forum as well as the President who visited Ogun and Borno states where he commissioned projects.

READ ALSO: APC National Convention: It is irresponsible to call for sack of Gov. Buni led CECPC, by Yusuf Ali

“We have had challenges in some states and we commiserated with them. We spoke about our unanimous appreciation for Mr President and especially the confidence he has in the forum.

“We also passed a vote of confidence on the National Caretaker/Extraordinary Convention Planning Committee of the party chaired by Governor Mai Mala Buni and assisted by two other governors including Governor Abubakar Bello of Niger State and Gboyega Oyetola of Osun State; who have done an incredible job of running our party successfully, mobilising people into the party.”

“We discussed our coming convention which you may recall, I had cause to address the press when we visited Mr President in November. We expressed that both Mr President and the party have agreed that the convention should take place in February.

“So we took inputs about the reviews and we noted all the misrepresentations in the press and sought to correct it.

“The Progressive Governors’ Forum is one united body as you can see evidently from the attendance. And our decision is unanimous. We are united behind Mr President and we thank him. And we are united behind the Caretaker/Extraordinary Convention Planning Committee.”

The governors, however, did not stamp a date for the convention, saying they’re just one arm of stakeholders and cannot take a decision of that magnitude alone.

“Yes, February is still realistic. But we are just one group of stakeholders. Our party respects institutions. It is the appropriate organ of the party, the National Caretaker Committee that will announce a date.

“We have agreed and they will announce a date in February. The announcement comes from the party. It is a party decision. There are other stakeholders that they are consulting with and to show respect and institutional limits, we are not going to overstep our bounds.”