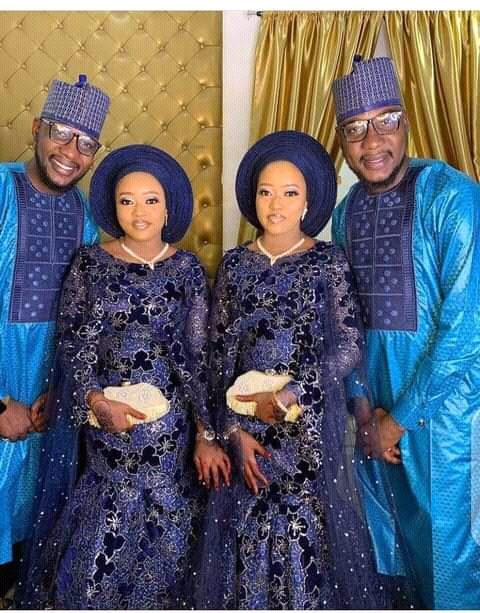 Last week, the famous Kannywood twin musicians, also known as tagwayen asali, got married to identical twins from Katsina, and since then, fans are curious to know how they plan to live their life as twin couples.

In an interview with BBC, monitored by Neptune Prime, it was revealed that the twins are living in the same house, and even eating the same meal.

“Since when we were small children, we have that close-knit relationship, which was aided by our parents. We envisioned that what usually separates twins is marriage, so we planned to marry twins, identical ones like us, who have manners and patience so that it will strengthen our mutual relationship.

“We thank Allah SWA for blessing us with these diamonds, for they are jewels. Whatever we instruct them to do, they do so without hesitation as they are very humble, with good character and upbringing”, one of the musicians narrated.

The musician twins were introduced to their significant other by the female twins’ friend named Bilkisu. She told them about the female twins whose dream is to marry identical twins too. The Katsina born twins have been fans of the ‘taqwayen asali’ for many years. Hassan narrated that they’ve been praying for Allah’s guidance to make the right choice and when they were told about the Katsina twins, they eagerly agreed to date them without even seeing them.

“We travelled to dutsamma for the first time in our life, just so we can meet them. The visit was fruitful as we were able to know each other well. We dated for a single year, but we feel like we’ve known each other for so long. We were able to recognize each of them.

“The eldest among us married the eldest among them. This had been our routine since, whenever we are introduced to twins, Hassan goes to Hassana and Hussein goes to Husaina. They are the 6th twins we dated, and this has been the rule since.

“When we heard that it’s twins that want to marry us, we were so delighted, as we know we will be together in the same family. Marriage had always been our fear that we may be separated from each other”, she responded.

The twins plan to stay together and build up an extended family, full of love, peace and happiness.

“Our biggest dream is to build an extended family in the sense that our wives and kids will be in the same house, where the kids cannot even differentiate between their real parents. We want a close-knit family that will strengthen our mutual love and bond,” they lamented.

When probed if they will marry another twin in future, they replied, ”Polygamy is not something we planned, talk less of thinking if it will be twins or not. Though we don’t know what Allah has planned for us, they concluded.’