Aisha Najamu of the Izzar So Hausa film series being produced by Bakori Television in Kano has explained that the eyes people see on the Television are natural and she also does not take drugs as being speculated by her fans. 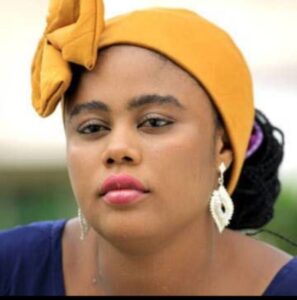 Speaking to BBC Hausa Service, Aisha revealed that she is a divorcee having married at the age of 13 is natural and is only implementing the script meant for her role. And in most cases, you will see her appearing like somebody who has taken drugs or is under the influence of alcohol, she has never taken any because she came from a disciplined family.

Her father is a Fulani from Jigawa State, and when her marriage broke up, she sought his permission to join Kannywood which he blessed her.

On the alleged rumour that she is in love with the producer of Izzar So, Ahmad Lawan, Aisha laughed and said she has a very good working relationship with him and all other members of Izzar So, both male and female.

Most of her acting appears to be real because she has perfected her role very well, but there is nothing like a relationship between her and her boss who made her what she is today.

Similarly, she has no regrets about joining Kannywood because it is a decent profession. As far as she is concerned, she will continue acting until she gets married. If you are a civil servant or public servant, you will wait for 30 days before getting a salary, but in Kannywood, you go for shooting, immediately you finish, you collect your money, it is the easiest way of stopping women from prostituting.

On her regret in life, Aisha said, there was a time her father gave her the beating of her life when somebody came to their house, looking for her father and she decided to take him to their farm, this took them a very long distance and before they came back, it was late. The man would have gone with her or killed her father since they have never met him and up till today, she has a scar on her forehead, that she will never forget.