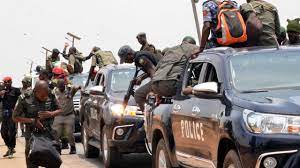 A joint operation led by Nigeria Army, Police including paramilitary, agencies, vigilante groups and hunters in the Bassa local government areas, carried out a raid on the hideout of armed bandits leading to the rescue of kidnapped victims and ultimately stabilizing the general security of the area.

In the cause of the operations, the wife of the Deputy Chief of Staff to Plateau State Government who was said to have been kidnapped on Sunday evening at her residence was rescued along with one (1) Medical Doctor of Nakowa Hospital in Barkin Ladi who was also kidnapped on 10/01/22.

A dead body of a 13-year-old girl who was raped along Bokkos Road with a stick inserted into her private part was found during the joint operations.

Five (5) suspected bandits confessing to being from Tafawa Balewa areas in Bauchi State were also arrested during the joint operations.

The suspects are still in the custody of the Nigerian Army, Sector 4 Operation Safe Heaven Barkin Ladi for further interrogation.

In a related development, some gunmen stormed Plateau State Polytechnic on Wednesday and kidnapped two students identified as Bencit and Lohfe.

The three gunmen stormed a student’s hostel, ‘Plateau Embassy’ towards the end of the school fence at Heipang and whisked the two girls away after shooting sporadically in the air.

However, in the late hours of Tuesday 11 January 2022, troops of Operation Safe Heaven received a  distress call of an attack on Acha Community in Bassa Local Government Area of Plateau State.

The troops responded swiftly and mobilised to the village. On reaching the community, the attackers had fled the village. Houses were destroyed and some villagers lost their lives during the attack.

The Commander of Operation Safe Heaven, Maj. Gen. IS Ali while commiserating with the families of those who lost their lives during the attack, reiterated his resolve to ensure perpetrators of such evil face the consequences of their dastard acts.