Home Health Kano set to immunise over 3.6 million children against polio in January 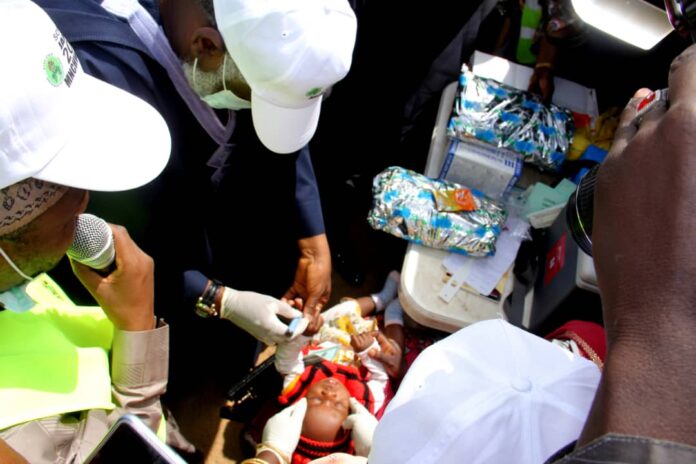 Kano set to immunise over 3.6 million children against polio in January

Kano State Governor Dr Abdullahi Umar Ganduje has stated that over 3.6 million children would be immunized against poliovirus in the Maternal Newborn and Child Health Week (MNCHW) January campaign.

According to him, the MNCHW would be conducted alongside the Outbreak Response exercise (OBR1), where immunization personnel would go house to house to immunize children below 5 years against poliovirus.

“The aim of the Maternal Newborn and Child Health Week is to improve the health care services for pregnant women and their children”. He said.

The Governor represented by his Deputy Dr Nasiru Yusuf Gawuna disclosed this on Sunday at Ungogo Local Government while flagging off the OBR1 and MNCHW January campaign in the State.

He went on to explain that Kano State Government is highly committed to providing adequate health care services to its people.

“We should not relent in ensuring that pregnant women attend antenatal in the hospitals across the State.

The Governor noted and appreciated the Federal Government, Local Government Chairmen, Emirate Councils and development partners for their commitment towards sustaining the hard fight against Polio and therefore urged them to consolidate on the success recorded in the exercise.

On his part, the Commissioner Of Health, Dr Aminu Ibrahim Tsanyawa urged parents to cooperate with immunization personnel towards ensuring the success of the exercise.

Other stakeholders who spoke during the occasion include the representative of the Emir of Kano, Dankadan Kano Dr Bashir Muhammad, Chairman of Ungogo Local Government Alh. Abdullahi Garba Ramat and representatives of development partners.