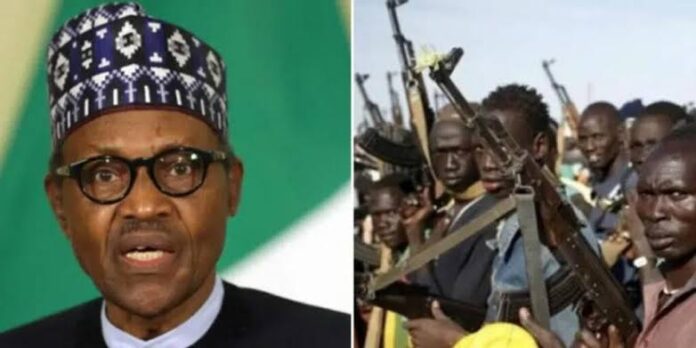 The Federal Government has formally declared bandit groups operating in the country as terrorists.

The declaration is contained in a gazette proscribing their existence and restraining any person or group of persons from participating in activities of bandit groups.

This follows weeks of footdragging, after Justice Taiwo Taiwo of the Federal High Court in Abuja, granted an ex parte application for Yan Bindiga (Hausa word for gunmen) and Yan Ta’adda (Hausa word for terrorists) to be declared as terrorists

The declaration titled ‘Terrorism (Prevention) Proscription Order Notice, 2021 is contained in Volume 108 of the Federal Republic of Nigeria Official Gazette.

It read in part, “Notice is hereby given that by the Order of the Federal High Court Abuja, in suit No. FHC/ABJ/CS/1370/2021 dated 25th November 2021 as per the schedule to this Notice, the Activities of Yan Bindiga Group, Yan Ta’adda Group and other similar groups in Nigeria are declared to be terrorism and illegal in any part of Nigeria, especially in the North West and North-Central Regions of Nigeria and are proscribed, pursuant to sections 1 and 2 of the Terrorism (Prevention) Act, 2011.

“Consequently the general public is hereby warned that any person or group of persons participating in any manner whatsoever in any form of activities involving or concerning the prosecution of the collective intentions or otherwise of the groups referred to in paragraph 1 of this Notice will be violating the provisions of the Terrorism (Prevention) Act, 2011 and liable to prosecution.”

States in the North-West geopolitical zone including Zamfara, Katsina, Sokoto and Kaduna have been ravaged by banditry in the last year. The nefarious activities of the marauders have also spilt into the North Central and other zones in the country.

Also, President Buhari while speaking during an interview with Channels TV, insisted that the administration had made progress in tackling insecurity especially in the North-East part of the country where the Boko Haram and ISWAP terrorists are holding sway.

The President reiterated that when his administration took over in 2015, many local governments were under the control of Boko Haram terrorists.

But as of now, he stated that no local government is under the control of terrorists.