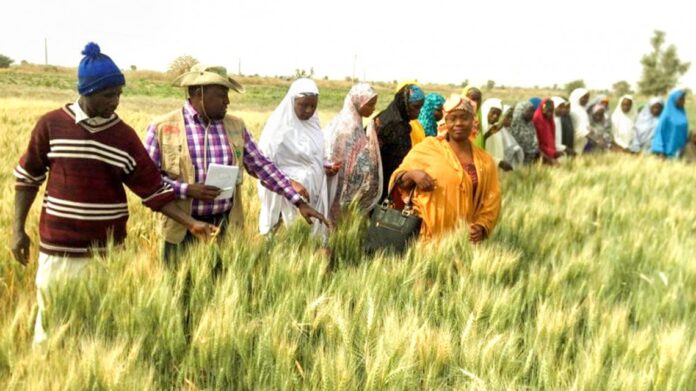 In a bid to boost food production in Nigeria, the Federal Government has released 49 new high yield crop varieties to farmers through the National Varieties Release Committee (NVRC).

Oladosu Awoyemi, the NVRC chairman, made this known on Wednesday at the 30th meeting of the National Committee on Naming, Registration and Release of Crop Varieties, Livestock Breed/Fishes in Ibadan.

The News Agency of Nigeria (NAN) reports that the meeting was held at the Conference Hall, Secretariat of the National Centre for Genetic Resources and Biotechnology (NACGRAB) in Ibadan.

Mr Awoyemi said: “All the 49 hybrid varieties of 11 crops submitted for consideration, registration and release by the Nigerian Research Institutes and Private Sector Seed Companies were approved for release.

On the activities of NVRC, he said the decree that set up the committee makes it mandatory “for anybody who wants to release new varieties of crop into the Nigerian farming community to send samples of that seed to research institutes that are relevant for it”.

“The research institute will test such seed across the ecological zones for which it is recommended.

“And, when they are satisfied that it is suitable for cultivation in Nigeria, then, they will bring it to the committee to officially consider it for release on registration.

“We have a national register of all-important seeds that are produced in Nigeria that has been satisfied by the committee.

“And, if there is any new research officer who wants to go into any crop he has to go into the register to see what has been done in the past before he can now start of what to do in the future,” he explained.

In his remarks, Mohammed Alhassan, the commissioner for Agriculture in Jigawa, who sponsored the release of Durum Wheat said, “this is the first time hard wheat (durum wheat) would be registered and released to Nigerian farmers.

According to Mr Alhassan, Durum wheat is very high in yielding, has very low fertilizer requirement, big grains, very attractive and even the price is different in the markets which make it give farmers high earnings.

He said that the expectations of farmers in Jigawa were to continuously have improved varieties of various crops planted in the state.

Mr Alhassan said the vision of the state government “is to make sure that economy of the country was improved through agriculture for the benefits of Nigerians, especially people of Jigawa.

Also, Shehu Ado, the National Coordinator for Maize Research, said the development of the new crops varieties were encouraging.

According to Mr Ado, some crops, which are not even grown previously in the country, such as oat, “is now being cultivated to improve the availability of food in the country.

“If we can grow our own oat, then, such amount of money expended in foreign exchange on importation of Oat will be conserved for the country.”

In his remarks, Olusegun Ojo, the Director-General, National Agricultural Seeds Council (NASC), said the 49 that have been officially released by the committee would be passed on to the council.

Mr Ojo said the council would make arrangements for wide multiplication of the crop for distribution to all farmers across the country.

“The process of getting a crop released for broad distribution involves testing the seed at research institutes and on farmers’ fields across the country.

“It is only when representatives of farmers have accepted that the crop is good for them and that such crop is better than the old varieties, then we bring it to the committee for consideration for official release,” he said.

In his remarks, Abdullahi Mustapha, the Director-General, National Biotechnology Development Agency (NABDA) said the agency was saddled with the responsibility of looking into the genetic constituents of the crops.

“Looking at it from that angle, this is a transformation of the crops and bringing in new varieties of the crops; it affects genes constituent so the gene threat is what defined the quality, the yield and characters there.“