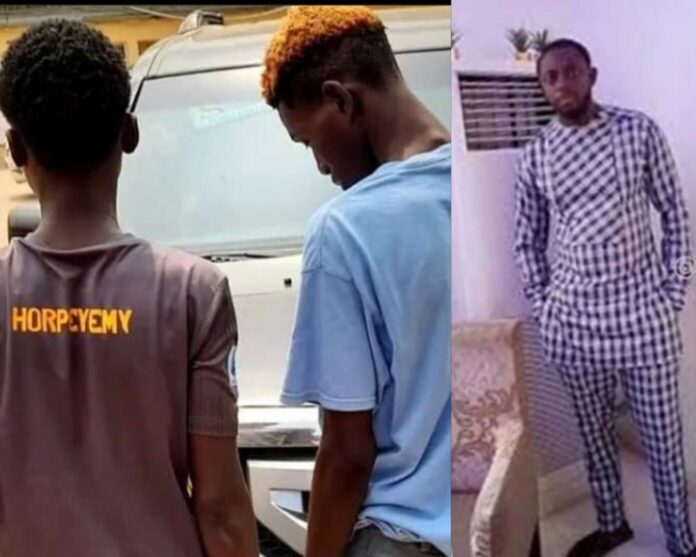 The Lagos State Police Command has said the suspected killers of Babatunde Dada, a pastor with the Redeemed Christian Church of God (RCCG), will be arraigned in court today, Wednesday, January 12, 2022.

Adekunle Ajisebutu, Police Public Relations Officer (PPRO), made this known to journalists in a statement issued on Tuesday.

READ ALSO: How we robbed, murdered pastor who gave us shelter in Lagos &#8211; teenage suspects

According to him, the law enforcement agency was committed to ensuring the family of the deceased clergyman get justice, hence their arraignment.

“Be informed that the suspects arrested in connection with the murder of Babatunde Dada, pastor of the Redeemed Christians Church of God, FESTAC Town will be arraigned at the Yaba Magistrate Court tomorrow 12th January, 2022”, the police spokesman added.

The two suspects, Farouk Mohammed and Jamiu Kasali, were arrested from where they had fled after allegedly perpetrating the act.

Mohammed and Kasali were said to have murdered the pastor of the RCCG at 6th Avenue in FESTAC Town last December, while Mohammed was tracked to Ilorin, Kwara State, his partner Kasali was apprehended a few meters away from the crime scene.

Earlier, Lagos State Commissioner of Police, Hakeem Odumosu, hinted that the exhibits used to commit the act have been recovered, stressing that the suspects would be charged to court.

Recall that the suspects stabbed the 46-year-old pastor to death on December 2, 2021 and fled the scene with his bag containing some money.

Neptune Prime earlier reported that the suspects, who claimed to be upcoming musicians, approached the unsuspecting pastor on the pretext of being strangers in Lagos who had no place to stay.

The deceased was said to have lodged them in a room in the church, which also served as his residence only to be attacked at about 12 noon the next day and abandoned in a pool of his blood to die.

The suspects attended church service the Sunday before the incident, and also came out during an altar call to ‘surrender their lives to Jesus’

He said: “The Pastor came to Church in the morning, gave us money for food, and left. Later, he came in with a bag containing money.

“Few hours before then, Farouk got a telephone call from his mother, urging him to come home quickly that she was sick. We were contemplating how he would get money to take his mother to the hospital when the Pastor walked in with the bag containing money.

“We followed him upstairs, hit him with a plank, before stabbing him with a broken bottle in the neck. He fell down. We grabbed the bag and left the house.”

On his part, Mohammed, 15, said he lied to his parents that he was coming to Lagos for a show, being an upcoming Musician.

He said: “I lied to my mother that I would get at least N200,000 from the show. We are upcoming musicians. We have been in the industry for three years. When things were not going on as planned, we decided to do something else, to invest in our music industry.

“Our mission in Lagos was to look for where to perform. But that plan changed immediately when we saw the pastor with the bag containing money.”

After weeks of missing, mother of 2 found dead in trado-medical doctor’s compound