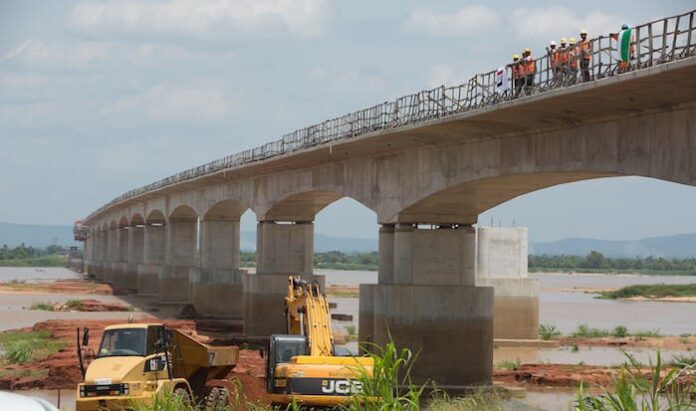 Second Niger Bridge to be ready by November – FG

The Federal Government has assured that the Second Niger Bridge will be completed by November this year.

The Minister of Information and Culture, Alh. Lai Mohammed disclosed this at the end of the End-of-the-Year Media Parley in Lagos.

A Radio Nigeria 7 am network news bulletin on Sunday, monitored by Neptune Prime, said the Minister told newsmen that various highways and bridge projects were ongoing across the six geopolitical zones of the country.

Lai Mohammed said the bridges include the much talked about Second Niger Bridge and is expected to be ready by November 2022.

“The bridges include the much talked about 2nd Niger Bridge which is currently at 78% of completion and expected to be ready by November 2022. Ongoing works on the bridge consist of construction of the 1.59km bridge long bridge and 10.3km length of approach roads. The total length of the project being worked on is 11.9km. The bridge and approach roads are 2 × 3 lane expressways,” he said.

Other ancillary works according to the Minister include the construction of two secondary bridges at Oko-Amako and Atenne Roads.

Alh. Lai Mohammed told journalists that in order to ensure that the private sector participates in and contribute to the implementation of the federal government road infrastructure development programmes, the Federal Ministry of Works and Housing had developed the Highway Development and Management Initiative (HDMI), a framework for the private sector participation in road development.

“The rationale behind the private sector involvement under the HDMI is to provide an alternative avenue of financing road construction, management, and maintenance.

Out of the total length of the federal road network of about 35,000km, the first phase of the proposed project will cover a total length of about 1, 963km. Most of the ongoing projects of the Ministry, especially of the HDMI, are already attracting massive infrastructure investment; it is envisaged that over N18 billion direct investment will be mobilised in the first phase of the project.

He expressed the delight that the policies, programmes, and projects of the Federal Ministry of Works and Housing have contributed immensely to stabilising the macro-economic situation of the country, especially in the area of job creation.