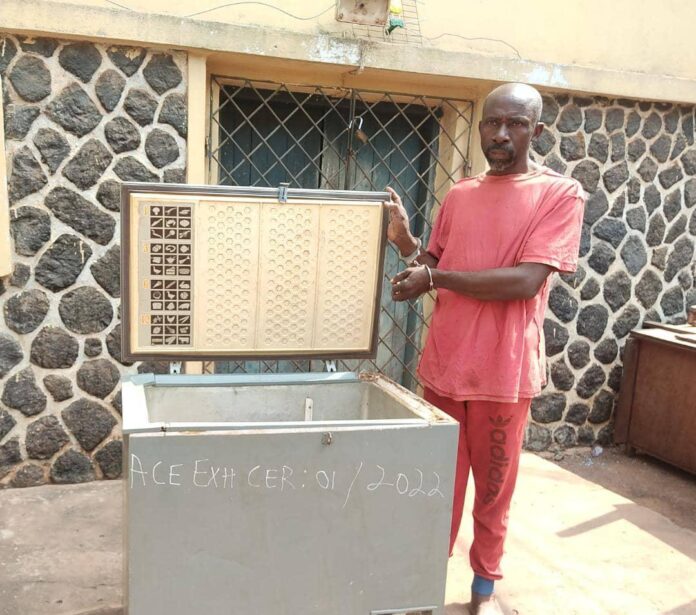 The Enugu State Police Command has arrested a 52-year-old man, Ifeanyi Amadikwa who allegedly killed his three children, aged 11, 8, and 4, and hid their corpses in a deep freezer.

It was gathered that the suspect who is residing at 74 Nkwubor Road, Emene committed the evil act when the mother of the children went to market.

Sources said the mother of the deceased teenagers, who left her children in the custody of the suspect, raised the alarm when she came back in the evening and could not see her children.

The suspect, it was gathered, drew the attention of her wife to the freezer which he brought home from his shop the previous day and on a closer search, the lifeless bodies of the three children were discovered inside with bruises.

A statement from the spokesman of the police in Enugu, Daniel Ndukwe confirmed the ugly development, noting that police operatives attached to Enugu Metro Area Command of Enugu State Police Command have arrested the suspect.

“Preliminary investigation showed that the suspect’s wife and mother of the children, went to the market with her only male child on 04/01/2022, leaving the others in the suspect’s custody. She, however, came back in the evening hours of the said date and could not find any of the three children.

“But while searching for them, the suspect drew her attention to the said fridge he had brought back home from his shop on 02/01/2022 and kept in their apartment’s veranda.

And on close observation, the lifeless bodies of the children were found in the fridge with bruises, suggesting that they might have been murdered and dumped in the fridge.

“Meanwhile, the lifeless bodies of the children were immediately moved to the hospital, where they were confirmed dead by medical doctors on duty, and deposited in the mortuary for preservation and autopsy,” he stated.

Ndukwe averted that the Commissioner of Police, Abubakar Lawal while commiserating with the mother, relatives and friends of the deceased children, has assured commitment to thoroughly investigate the case and ensure that justice prevails.

According to him, the commissioner has ordered the deputy commissioner in charge of the State Criminal Intelligence and Investigation Department to conduct a conclusive investigation into the case and ensure everyone found culpable is brought to book.