The Publisher of Daily Nigeria who is now on self-exile in London has named his new baby girl after Dr Umma Kaltume Borodo to appreciate what the woman did for him when he was undergoing his university degree. 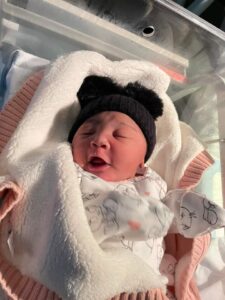 Jaafar Jaafar in a statement explained how he will never forget when he secured admission into the university and had no money to pay, but as God may have it, Dr Umma Kaltume Borodo gave him the sum of N15,000 then which he used in paying for his school fees and other expenses. And that was how he continued his studies and bagged his university degree, before going for further studies.

READ ALSO: 2022 will be a difficult year for Kanu, Igboho — Primate Ayodele

Jaafar Jaafar who is the reporter that exposed Governor Ganduje’s dollar scandal recently received the sum of N800,000 as a fine paid to him by Ganduje who took the defendant to the court but lost. Later, Jaafar Jaafar received several threats to his life and decided to go on self-exile.

Jaafar Jaafar is a bold and highly connected reporter who was once an adviser to former Governor Kwankwaso on electronic media, but later relocated to Abuja and established his own online newspaper.