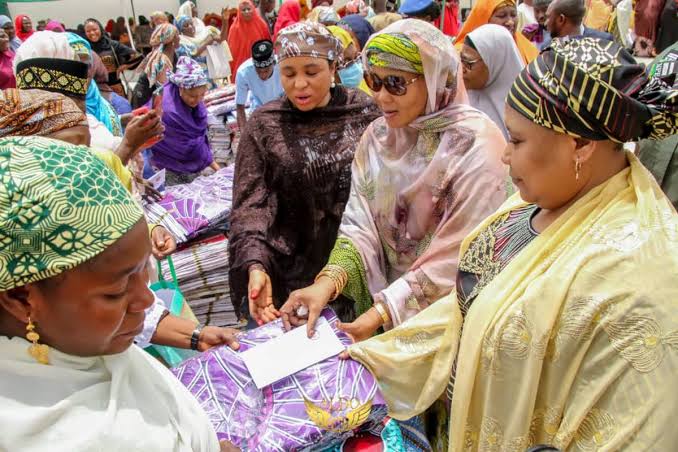 In an effort to put smiles on the faces of the less privileged and women groups in Bauchi State, office of the state First Lady in collaboration with Fidelity Bank have distributed wrappers and food items to women across the twenty Local Government Areas of the state as Sallah gifts.

Thousands of wrappers and other house hold necessities were distributed to the needy and other vulnerable people, as well as many women groups in the state.

Speaking at the presentation ceremony in Bauchi, the State First Lady, Hajiya Aisha Bala Muhammed said the annual Sallah presentation is part of her initiatives aimed at supporting less privileged, orphans, vulnerable children and women especially during such festive periods.

She appreciated the support of the women and also enjoined them to always extend similar support to other women particularly those living in the rural areas.

Hajiya Aisha said 10 ,000 wrappers will be distributed and Fidelity Bank in collaboration with Almuhibba Foundation donated 250 sacks of maize abs with 100 sacks of rice.

She said the items will not be enough when compared with the number of women and the population of the state, she therefore, advise leaders of various groups to distribute it to their members judiciously. While wishing the women a happy Sallah celebration.

The First Lady further cautioned women on the need to be shining examples by living a decent lifestyle for the sake of their self-respect and dignity.

“As mothers you have an important role in the eyes of the society and so, you should be upright and live an exemplary life, worthy of emulation for the upcoming generation”.

In their separate remarks, the beneficiaries interviewed expressed their appreciation to the First Lady, the Almuhibba Foundation and Fidelity Bank for the gesture. They pray to Allah to reward them abundantly.