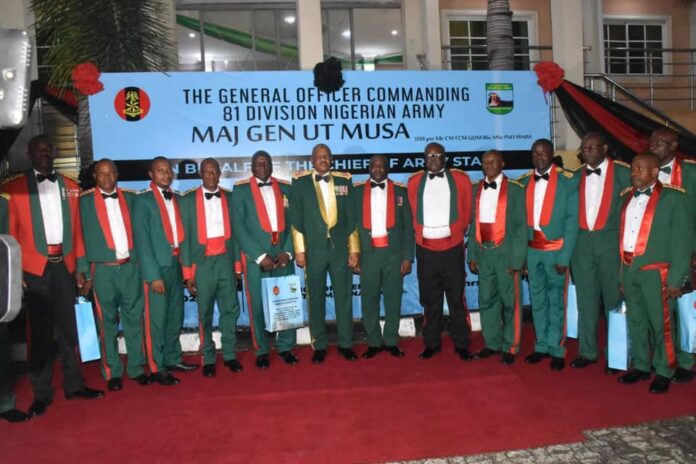 The Chief of Army Staff Lieutenant General Faruk Yahaya has honored retired officers in 81 Division of the Nigerian Army (NA) at a Regimental Dinner.

The Army Chief commended the officers for their selfless service to the nation and presented plagues to honour them.

The Army Chief who was represented by the General Officer Commanding 81 Division (NA), Major General Umar Thama Musa at the Regimental Dinner Night urged the officers to never rest on their oars even in retirement until the security challenge in the country are tackled in favour of the Armed Force and by extension the nation.

He said the Army is still open to their valuable contributions towards attaining her constitutional mandate and their supports will always be welcomed.

According to General Yahaya, retirement is an inevitable phase in the life of every military personnel as it marks the completion of active service to the nation. He therefore commended the retired officers for the remarkable achievements.

Earlier, the President Mess Committee Brigadier General Danlami Ndahi while welcoming the Retired Officers and invited guests, congratulated the retired officers and their families on behalf of the entire division on their successful and meritorious retirement from service. He said retirement marks the successful completion of active service to the nation.

Colonel Mustapha Anka (rtd) while delivering the vote of thanks on behalf of the retired officers said the COAS has laid a landmark which they much appreciate. He thanked the army for remembering them and for appreciating their sacrifices and service to the country.

In another development, the army said troops of 34 Brigade in conjunction with Department of State Service operatives have destroyed a training camp of the proscribed Indigeneous People of Biafra (IPOB) and its armed wing, Eastern Security Network (ESN) at Okporo in Orlu Local Government Area of Imo State.

The troops dislodged the training camp after exchanging fire with the dissidents, neutralizing two notorious members of the group, who have been on the wanted list of security agencies and have been terrorising residents in the general area of Orlu, Orsu and Njaba. According to a statement by army spokesperson, Onyema Nwachukwu, “

The statement added that the troops “equally destroyed the training shed and other facilities used by the separatists, including a shrine, which members of the outlawed group reportedly use for spiritual fortification. A local factory for fabricating weapons was also discovered and destroyed.

“A search of the factory uncovered three dummy guns, one locally fabricated pistol, one live round of 7.62mm, one live cartridge, two used shells of 7.62mm (special) and objects suspected to be charms, among other dangerous weapons.” Nwachukwu revealed.