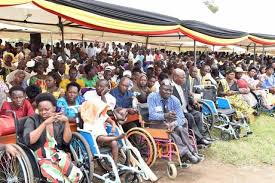 Persons With Disabilities, (PWDs) have demanded full participation in all electoral processes, threatening to sue the Independent National Electoral Commission (INEC) if they feel excluded in any way.

The PWDs demanded that INEC and other stakeholders create accessible voting points and necessary facilities that would ensure their improved participation in the electioneering process seamlessly as the June 18th governorship election draws near in Ekiti State.

They made the request in a report through the Centre for Citizens with Disabilities, tagged: “Pre-Election Assessment of Independent National Electoral Commission preparedness for Persons with Disabilities Participation for June 18 governorship election.”

The report obtained by the News Agency of Nigeria in Ado-Ekiti on Tuesday, said the request of the group for inclusion was already a matter of law, hence it must be obeyed, so as not to disenfranchise the special persons.

According to the Executive Director, Centre for Citizens with Disabilities, CCD, Dr. David Anyaele, the research is done to ascertain INEC’s preparedness in carrying along PWDs and ensure their security throughout the electoral process.

He urged INEC to collaborate with the security agents to ensure a free, fair, and credible election.

He said: “The key reason for the research is to hold INEC accountable, urging them to train PWDs on their rights and make them understand the provision of the law which will better shape their participation in the election.

“INEC should collaborate with the security agencies to reassure the electorate of their safety, to reduce tension, and brace up for security challenges, especially in some flashpoints.

“They should also provide Disability Desk Officers at each INEC LGA office and this position should be held by a PWD.

“INEC should also provide umbrellas and shades for albinos or allow them to vote as early as 8 a.m. to avoid them being under the sun and prone to skin cancer.”

Mr Anyaele, however, discouraged PWDs from being involved in vote-buying and selling, noting that it’s their civic responsibility to vote for a candidate of their choice.

“Poverty is not particular with PWDs alone, but I urge you not to sell your votes because of money. It is our responsibility to discourage any form of vote-buying and selling.

“It is everybody’s responsibility, not just PWDs because poverty does not discriminate as it hits PWDs, it also hits persons without disability.”

Others who contributed to the report included the Chairman, Joint National Association of Persons Living with Disabilities, JONAPWD, Kayode Owolabi, who urged INEC to take bold steps to improve the communication between them and JONAPWD.

He urged INEC to make election materials and facilities accessible for all PWDs, including Form EC40H, polling units, and assistive resources such as sign language interpreters, tactile ballot jackets, and magnifying lenses.