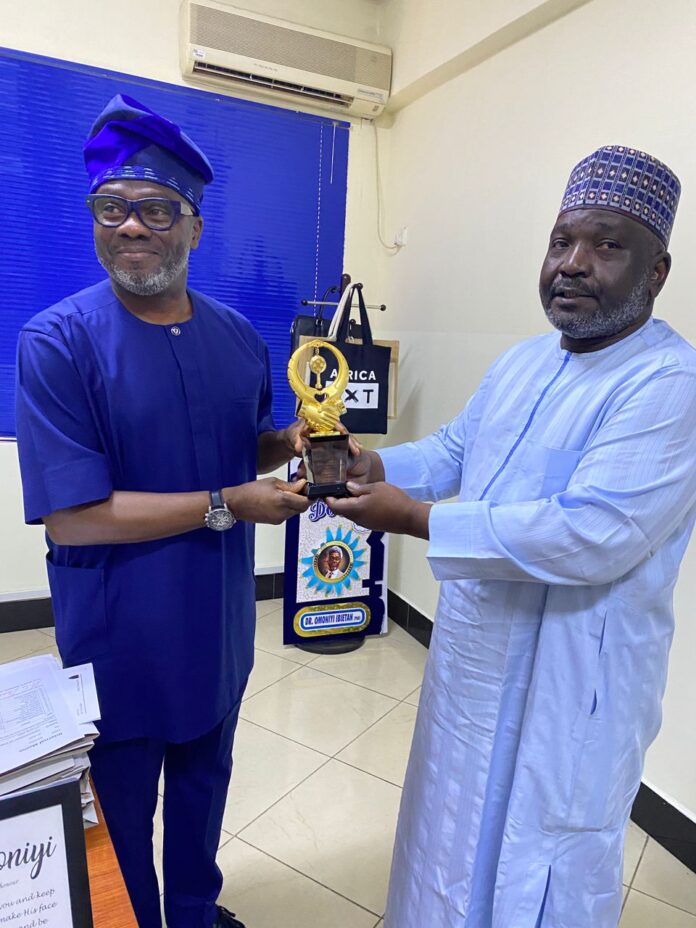 The Nigerian Communications Commission (NCC) has been conferred with an award of excellence as the Public Sector Regulator of the Year 2021 in recognition of the Commission’s efforts in ensuring the provision of qualitative and efficient telecommunication services throughout the country.

The award, which was conferred on the Commission by Neptune Prime Network Nigeria Limited, on behalf of the Lami Fatima Babare Cervical Cancer Awareness Foundation (LFBCCAF), was received by the Head of Media and Communications of the NCC, Mr Omoniyi Obietan on behalf of the Commission’s Executive Vice Chairman, Professor Umar Danbatta.

Presenting the award, Board Chairman of Neptune Prime Network, Alhaji Tijjani Musa Tumsah said the award, which was in special recognition and appreciation of the Commission’s goodwill towards the Lami Fatima Babare Cervical Cancer Awareness Foundation (LFBCCAF) couldn’t have come at a better time.

The LFBCCAF, is a non-profit organisation founded by Dr Hassan Gimba, and named after his wife, Hajiya Lami Fatima Babare, who died in 2018 from complications cause by cervical cancer.

According to Alhaji Tumsah in his remarks, cervical cancer has caused the death of more than 311,000 women worldwide, most of these in middle and low income countries which make up 84 per cent of global cases and deaths.

He emphasised that the foundation’s mission was to help women battle the personal issues related to the ailment by developing and implementing practical programs and by partnering with organisations and individuals to achieve health outcomes that reduce marginalisation and contribute to developing stronger communities.

The NCC’s donation of one million naira to the cause of the foundation according to Alhaji Tumsah, will be used to help save the lives of many Nigerian women who were oblivious of the dreaded disease.

Receiving the award, Dr Omoniyi Ibietan, thanked the foundation for the recognition. He stated that the Commission will not rest on its oars because the award has boosted NCC’s determination to work even more, within the framework of its mandate, for the benefit of the Nigerian people.

“On behalf of the Board and Management of the Commission led by our inspiring Executive Vice Chairman and Chief Executive Officer, Prof. Umar Garba Danbatta, I convey the gratitude of the Commission to the LFBCCAF and thank them for this special recognition.

“The Commission treasures this gesture and sees it as another wake-up call to do more in the effort to unleash the full potential of Nigeria’s digital economy Ibietan said.