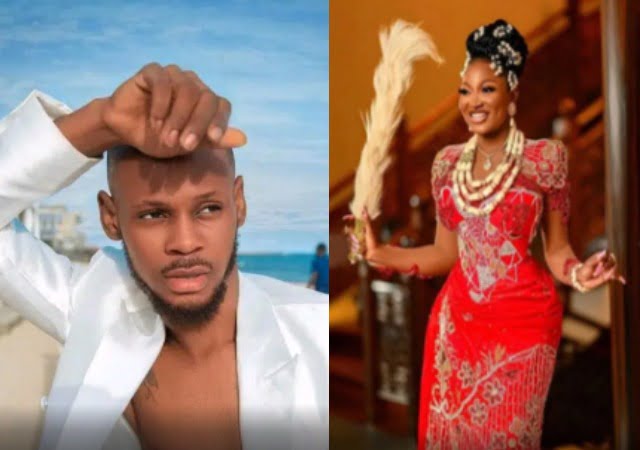 Wife exposes popular influencer, Papaya Ex, for having affair with her husband

Popular and controversial social media influencer, Raheem Abike, popularly known as Papaya Ex, has been exposed for having an affair with a married man who is allegedly roped in fraud.

It was also confirmed that another of her accomplice is a fast-rising Fashion Designer, Makililo Nelson better known on social media as Styled by Maklin Scout.

According to Gistlover, the young man who is married and has children has been paying for Papaya Ex’s extravagant lifestyle.

The married lover of Papaya Ex is reportedly so rich and has a wife and kids.

The blog added that the young man has been on EFCC’s radar for scamming people on Telegram which is his main source of wealth.

In addition to being wanted by EFCC for fraud, the blogger said he was closely monitored and almost arrested by the agency but he escaped, leaving his mansion in Abeokuta to Lagos along with his wife and kids.

Gistlover added that Papaya is one of the reasons, he abandoned his pregnant wife and kids as she successfully tampered with the young man’s head.

Captioning the video of the moment the wife of the alleged fraudster caught Raheem Abike and her husband red-handed in Lekki, Gistlover wrote:

“The guy don marry and he don get Pikin sef But papaya don make the guy send the legit wife commot for hin house with hin Pikin and currently pregnant with the second child. Information reaching headquarters be say Na telegram fraud the guy Dey do and he has duped millions of people, naso EFCC findam come him mansion wey him build for Abeokuta but he was able to escape through back doors and he finally left Abeokuta for Lagos, Lekki to be precise and he left the wife and daughter with belle for house.

“Fiam papaya see ready made man wey get plenty fraud money to spare like mother like daughter, Papaya mama muti OYO too try inside this life oo, dated Ajimobi, dated alaafin of OYO and Na side chic she be then, but her mama matter Na later, long story short the guy wife sha hear say Papaya don Dey knack her husband of which papaya is aware that the guy is married with kid but because of money she no gree comot, Na him buy papaya Benz , even this recent Mecca wey she go chase clout , Na the guy fund am.

“The wife con go island without informing the husband, come catch papaya for there. The matter was messy and she and papaya had a fight wey she disgrace papaya. Na so side chic papaya vex say wife disgrace am ooo, come tell the guy make him pursue him wife and pikin for Lekki that night, naso leggy (his nickname) pursue pikin and wife with belle for that night oo.

“One week later he come dey beg whereas the wife told our source that she won’t be disrespected and she ended her marriage with leggy. Plenty details still Dey but I Dey wait for papaya dogs make them say pim, one seconds I scatter everywhere as he Dey Hot, i Dey wait, I come in peace.”

However, Papaya Ex has not officially reacted to the heavy accusations leveled against her; instead she continues to upload her regular posts on her social media platforms.