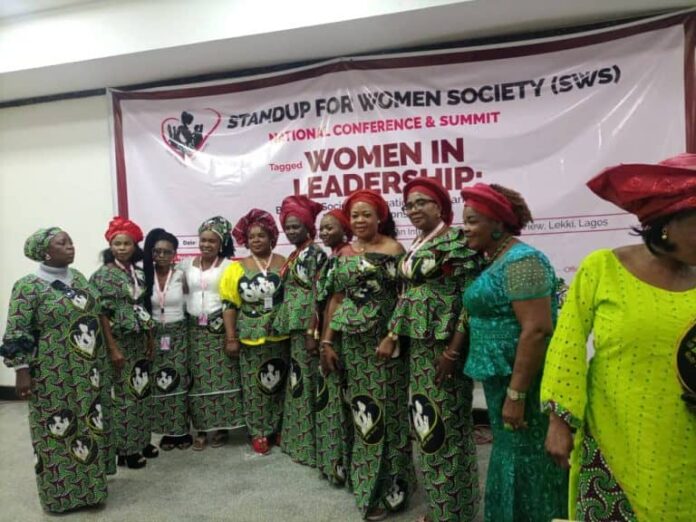 Stand Up for Women Society (SWS) has called on women to stand firm with one another in love and unity to promote good governance, peaceful coexistence for a better society.

The Founder and National President of SWS, Barrister Deborah Ijadele-Adetona, made the call at a national conference and summit held in Lagos State.

The women in their numbers from across the thirty-six (36) states including the FCT, converged on the Pelican International Hotel, Lekki to celebrate their achievements and to brainstorm on issues that matter at balancing societal obligations with marital and parental responsibilities to building a progressive country where women are allowed to take their positions at the centre stage where decisions are made.

Barrister Deborah said once women come together as one, they will get it right.

Keynote speakers at the event, Prof. Yemisi Adeparusi and a renowned Activist Aishat Yesufu, who joined via zoom advocated for women to begin to play active roles in their homes and politics.

Prof. Yemisi urged women to always make themselves available for training and retraining if they must contribute positively to the nation’s building.

She encouraged women to build on these components towards building a better society.

Aishat Yesufu called on women to participate in governance as women who stay behind and allow others to make all decisions will not go anywhere.

Yesufu said countries where women participate actively in governance are the ones doing well.

“Era of aso-ebi should be over, we should also seek our financial independence. We should also buy properties, and own lands. When our husbands are giving their sons land, we too should have land and properties that we are giving our daughters.”

On peacemaking and conflict prevention, Aishat said women have not played many roles and as such called on them to be focused on conflict management, its prevention and resolution which are peace-making processes that will deliver peaceful coexistence in society.

Aishat Yesufu added that education should be made paramount, especially for the girl-child. She encouraged women to go beyond singing and praising politicians to sit amongst decision-makers where their voices would be heard.

The founder of the first old people’s home in Nigeria, Barrister Hauwa Umar Jibril, called on Nigerians to support her advocacy for a conducive environment for the elderly in the country.

Hauwa said, “The home is supposed to care for the aged. I discovered in the Northern part of the country, our tradition and religion do not give room for elderly people to leave their homes, times have changed, there is so much urbanisation and migration, people do not stay with this set of people and they end up living a lonely life till death.

“That is why I seek more participation and support from women across the country to join me to take care of the elders in our society.”

The Barrister called on well-meaning Nigerians to support the old to live happily on earth to stop old age sickness and sudden death.

To spice up the event was a cocktail night, followed by a dinner and award night that celebrated men and women who have through their struggles put smiles on the less privileged faces with their empowerment programmes.

The SWS is an advocate for women’s rights and total development, building confidence to qualify women to participate in public matters in the society and to project and plan for women’s world in our society as active players in building enabling environment for all.